For those of you that know me know that I have competed in 3 competitions.

I have always been an avid reader of Oxygen Magazine and always admired the women who competed and really wanted to do that but never thought I could. I have always worked out on and off but never really stuck to a program. In 2008 I joined a new gym and started enjoyed Fitness Boxing Classes 2x week with Marc Lebert and started doing his Friday night hill running “barf” sessions…anyone who has ever done any hill running knows how gruelling it is, but it works. I started seeing changes in my body – I was stronger and leaner. In 2008, after the passing of my father, I decided to start committing more to me and my health so I started taking extra boot camp classes with Marc Lebert and got some amazing results.

That same year I started organizing Lunch and Learn’s at my work and our first guest speaker was Tosca Reno – yes, THE Tosca Reno!!! She is a great inspiration that helped get the ball rolling on my fitness journey.

In January 2009 I started working with a trainer, not to compete but to just to take my body to the next level. It was that same time that I met James Erdt of The Fitness Star Network. After connecting with him he encouraged me to compete…it was never my intention to compete but after seeing some amazing results with my body I decided to go for it. So in 2009 I competed in my very first fitness competition with the Fitness Star – it was their very first show. I had a great time, made some amazing connections and realized that I got bit by the competition bug. 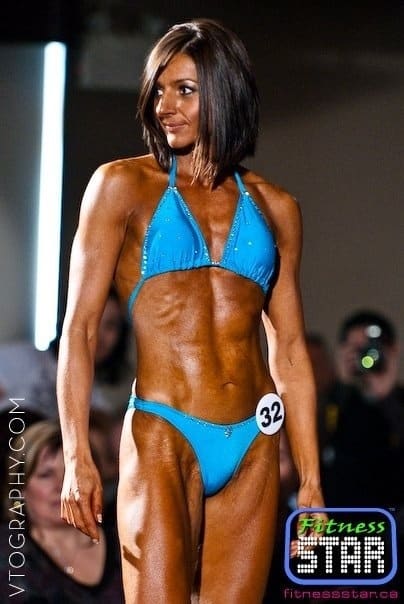 I started looking at other federations to compete and came across the IDFA. I went to watch one of their shows and loved the feel of it so decided that my next competition would be with the IDFA. At this time I was working with someone but wasn’t seeing the results I wanted so panicked.  I remember watching Nkechi at the IDFA show and met her at one of the posing sessions so I reached out to her for help. With her advice, guidance and support I made it to competition day and placed 3rd in my category. 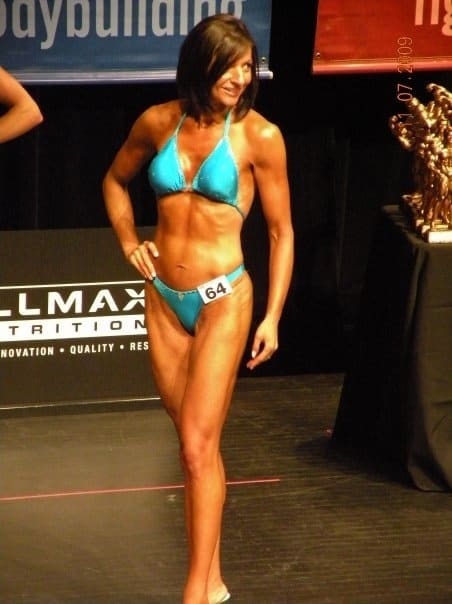 Going forward, I decided to compete at the next level with the IDFA that fall and worked with Nkechi. I was very happy with the competition prep that she provided, her support and guidance that helped me get to the next show. I built a bond working with her – I strongly admire her strength and drive. 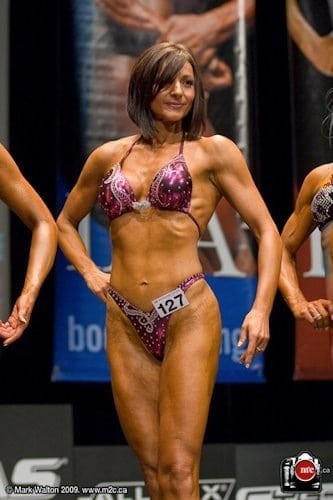 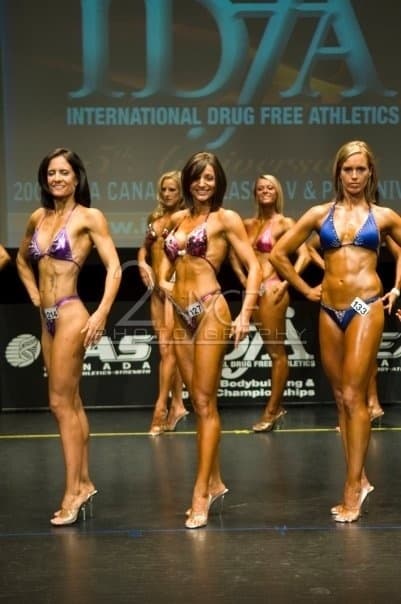 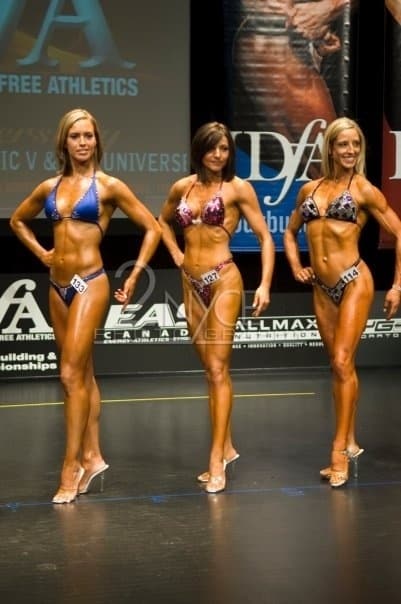 (I’m standing beside one of my mentors/leaders Carol Lama  – funny this was in Fall 2009 – and now we are together on Team Rockstar  with Lindsay Messina, Gretchen Coley and many more amazing people- funny how the universe works 🙂 )

Now it was the end of competition season, like many competitors, I felt lost and out of touch. You see, I reached my goal of competing. In fact, I competed 3x that year and I was and am very proud of myself for reaching my goals but I feel that I treated my goal with an end in mind instead of a journey. What many competitors do, me included, is try to continue with competition prep even though not competing. You get use to the idea looking a certain way, that isn’t necessarily a realistic look or way of living. I continued to weigh out my foods and be strict with my diet. I feel that this took a toll on my body.

So where do I go from here? I picked another competition date and that was my goal. So I started working towards my “goal” of competing again. I was almost there but gave up. I was at the gym 6 days a week. Don’t get me wrong, I love going to the gym, I love getting strong, I love seeing changes in my body but I felt that my body was having a harder time getting to where it had to be to step on stage again. I also couldn’t mentally get into competition prep. I felt like I was doing it just to do it. There was no real reason why I wanted to compete again. Yes, I wanted to keep seeing improvements in my body but I thought do I really have to step on stage for that.

Never say never. I am content right now with the 3 competitions under my belt and grateful for the experience and all the great people I have met. I wouldn’t of met these people without competing and for that I am forever grateful.

I have wrote and rewrote this blog several times and after adding the photos – they did remind me of all that I did accomplish that year.  Three competitions, I was featured in Oxygen Magazine, in Muscle and Fitness Hers, Natural Muscle Magazine, Xtreme Lifestyle Magazine, and Beyond Fitness Magazine.  I met amazing people on this journey.

For anyone that is considering competing, I do recommend it as you learn so much about yourself on this journey and you meet so many amazing people.

Thank you Jenny!! It was difficult but it was well worth the journey. At this time, I don't plan on competing. I am just focusing on general overall good health. Competing has lead me on so many different paths and I have met so many amazing people and I am forever thankful for that! :)

Wow Diana!! Very impressive! I have read what goes into training for these events and tried to take on some of it a while back when I was obsessed about fitness (with out help, just by myself) and it was hard! I admire your ability to find out how to get your body to this point. I also admire you for sharing your story here and that this is not something you are sure you want to do again (maybe you will of course!) I think its great that you accomplished this and built the connections and relationships you did through this experience. And now your onto something a bit different and your love of fitness continues in a new shape and form. I applaud that!

If you did compete again you'd clearly be coming from a strong place mentally, emotionally and physically. You see a lot of people who do shows relentlessly, showing up at every one. That generally starts to show a few shows in when the energy in their eyes is gone. And i know people who do it as weight control...almost like a life time membership to Weight Watchers!!! (which, if you think about it.... is kind of like WW saying "we know this isn't going to work for you long term so come on back and lose that same weight over and over for the rest of your life with us!!!)

If you let things get too far from center and keep pulling it back drasticallly to compete over time you cannot help but sustain some metabolic damage not to mention it messes with your head a bit as you mentioned the infatuation with "show lean". Its not a look for everyday. period. And to think it's sustainable is not healthy emotionally. Id say if a person could sustain a reasonable weight that is not out of range for a show AND a healthy, strong weight for them and doing a show meant dialing in sensibly without a drastic weight reduction, compete and then go back to that reasonable sustainable weight; that is the ideal scenario. You wouldnt be as physically, mentally or emotionally beat up from a dial in that was on such a gentle slope and you could compete while only gaining the positives. It is a wonderful community of people, and it's empowering doing the prep required ( i find it so anyway) and I love seeing how i can change and make positive, noticeable gains on this, er, mature body each time i compete. It's like kicking aging in the face! I train hard all the time.... i take it up a notch to compete and my body has held on to that muscle like a trophy!! In fact, after being out of the gym for almost 3 months due to weeks and weeks of eye surgery, 3 weeks back in the gym I am just as strong as i was before!!! (im 8 lbs heavier from being a regular exerciser for over 20 years to stopping all working out for 3 months ....over Christmas...oy) but, that is the other thing competing has taught me. Im not panicked about having to now lose this 8 lbs that i have to try every diet out there to lose the weight. It's given me confidence that i KNOW exactly what it takes for this body to respond to a weight loss goal... and that is freedom.

Oh yeah...this is about you. lol All that to say..... if you did compete, you sound like you're in a healthy frame of mind and you ARE in a great place physically as you look mahvalous these days so it would be whether or not the inspiration to put those plexiglass shoes back on and do your strut ever came up. Like if a band of Rockstars decided to make it a fun goal to compete together just for a good time?? (im just saying) It may... it may not, but being in this healthy, happy place is a HUGE freedom and achievement and that itself deserves a trophy!! IMO :)

I love your comments Jacqui, and you are absolutely right about everything you said. I am in a different place.....I know what I need to do to get there....in a healthy way.

I think having the Rockstars onstage would be amazing - don't you think?? :)