Where To Find The Best Fado In Lisbon

If you ever find yourself in Lisbon, you have to make sure that you visit a Lisbon fado restaurant for a deeply moving, unique Portuguese experience.

What is Fado Music?

Considered the ‘soul’ of Portuguese music, fado music encapsulates an essence of melancholy with every note. The reason for this moody atmosphere is that the singer typically sings about the challenges of daily life. Before you jump to the conclusion that listening to fado is a depressing experience, there is a dominant essence of longing and hopefulness that frames the music of these Portuguese songs.

The Origins of Fado Music

Fado is commonly associated with laid-back pubs, cafes, and restaurants in Portugal. The expressive music genre dates back as far as the 1820s. These Portuguese songs are incredibly heartfelt and chances are, the audience will be completely wrapped up in the singing performance. 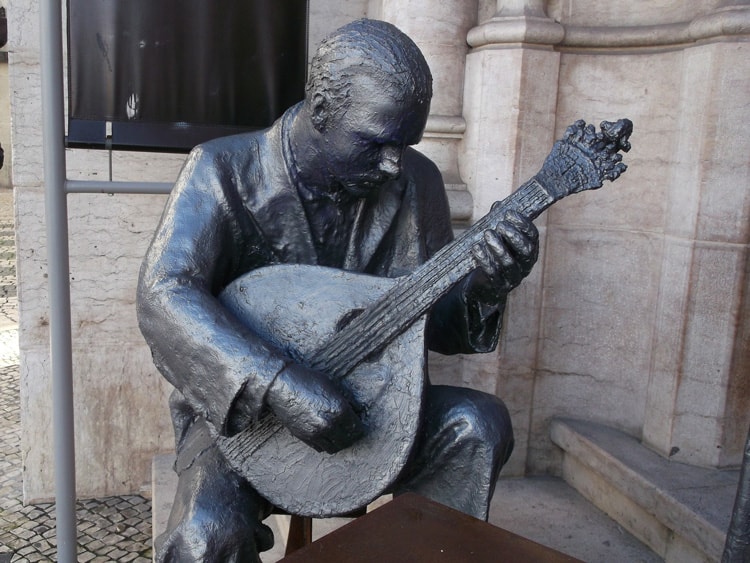 The singers for most fado performances are normally accompanied by one (or two) 12-string guitars, violas and sometimes even a small bass. There are two main fado styles – the Lisbon Fado and Coimbra Fado.

The more well-known of the two fado styles, Lisbon fado origins derive from social contexts of the marginalized. It peaked in the early 1900s and the popularity of the genre has continued until today as it plays an important role in the Portuguese culture. To show your enthusiasm for fado, Lisbon visitors clap their hands to applaud.

Although very similar in style to fado, Lisboa, Coimbra fado finds its routes in academics and privileged classes.  This differs from Lisbon’s working class origins.

Some of the best Fado in Portugal can be found in the bustling city of Lisbon. The following list of the best fado places in Lisbon should keep you well-entertained straight through the night.

So, take your pick and warm up your hands – you are going to be clapping a lot, this music is contagious! Make sure to check out these Fado restaurants in Lisbon.

Victoria from Bridges and Balloons

If you’re looking for somewhere unique to watch fado, Alfama neighborhood has you sorted. I’m not sure you could find a better option than the beautiful Mesa de Frades in Alfama. Housed in an old chapel, this small club is tiled with beautiful 18th-Century azulejos, which add to the faded but exquisite grandeur of the setting.

There’re just a handful of tables, including a mezzanine level where you can spend an intimate evening being serenaded by candlelight. The club is open from Monday to Saturday, from 8 pm – 2 am, and the shows start at around 10:30 pm. There’s a full menu of traditional Portuguese food, but the main draw of the place is the quality of the fado and the setting.

The chapel has an interesting history ­– it was part of the Quinta da Dona Rosa, a palace built by Dom Joao V for one of his lovers. Nowadays it’s owned by guitarist Pedro de Castro. The line-up of fado players is a mix of established players and rising stars. Despite its popularity, it doesn’t feel touristy and for us, it was a magical evening, experiencing a slice of enchanting Portuguese culture. 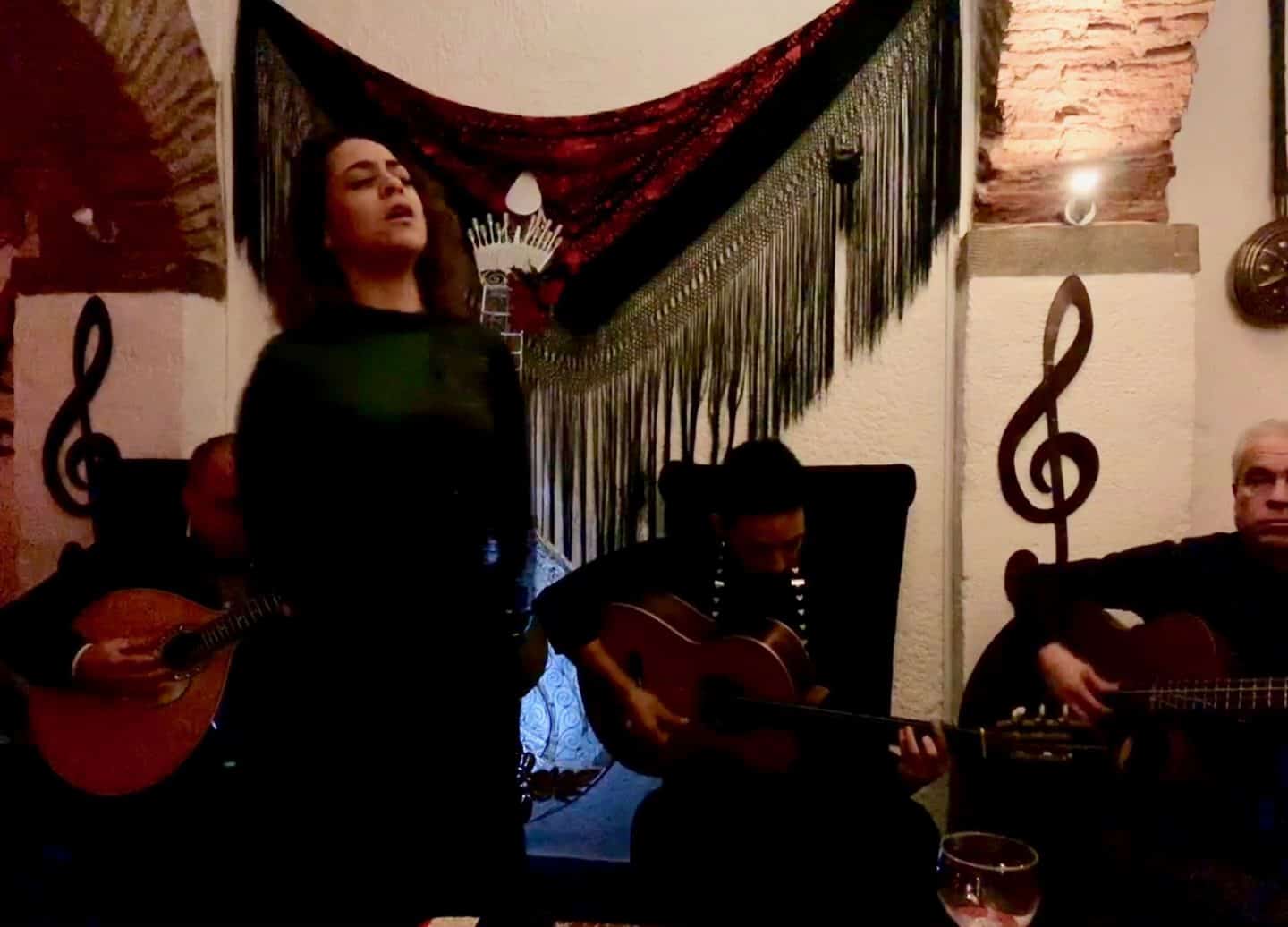 Jyoti and Nirmal from Story at Every Corner

We visited Saõ Miguel d’Alfama during our trip to Lisbon for its fado music. The restaurant is located in the Alfama district of Lisbon. The neighborhood is famous as a hub for fado music, old buildings (1770 earthquake), narrow alleys and its overall upbeat vibe.

Like most restaurants, Saõ Miguel d’Alfama has a food minimum to accompany the music. Although most of the traditional menus in fado restaurants are animal-based, we found a few vegetarian options. We had fried potatoes, a mixed vegetable dish, salad, a buffet of desserts. The food was good.

The music and service were awesome. The audience was a combination of local fado fans and tourists. The lyrics were in Portuguese but that didn’t matter. We seamlessly connected to the emotions of the songs and they were heart-wrenching. Read all about Lisbon’s authentic music, food and fun experiences. 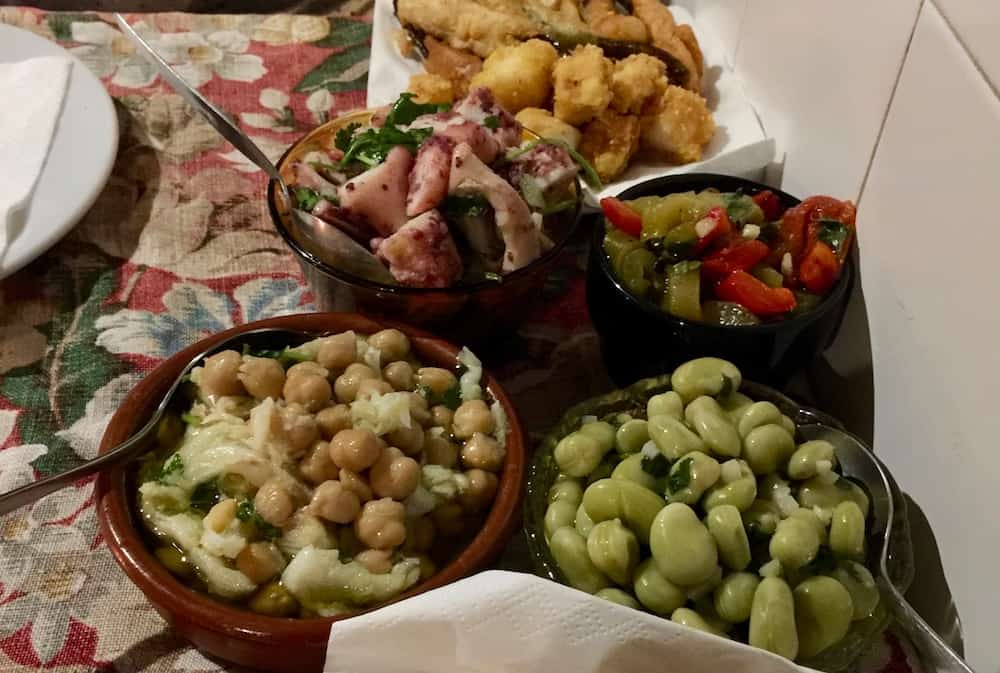 Sue from Travel for Life Now

While we were in Lisbon, we were determined to see Fado. There are many tourist restaurants that have performances, but we wanted to hear it in a neighborhood place. While we were doing a port tasting in a local restaurant, the owner suggested that we try one of the places near the Fado Museum in the Alfama area.

We spent an evening checking out a number of places — Arcaz Velho, Senhor Fado, Mesa de Frades, Tasca do Chico and Rua dos Remedios 83 (a bar that has amateur fado nights). We ended up going to Bela Vinhos e Petiscos (Rua do Remedios 190).

Walking into Bela Vinhos is like walking into someone’s home. There are about 15 small tables crowded into a room.  A few plates of cold tapas are already on the table when you enter. The cold tapas are very good but don’t eat them all so that you can also order some hot tapas. The tapas were excellent — fried cod and legumes, fava beans, cod with chickpeas, pickled peppers and octopus.

At 9:15, the lights were turned down and the performance began. The musicians and singers were less than 10 feet away. The singer song a deeply mournful fado. We saw two sets and left just before midnight. There may have been more sets after we left.

There is a fado performance every night at Bela Vinhos but you need to have a reservation. The cover charge is 15 euros.

If you are looking for the best fado restaurant Lisbon has to offer, then look no further than Casa de Fado. The fado music has been rated as a top cultural experience and the food is considered on par with this excellence. Every second spent listening to this heartfelt music is well worth it.

The service of the restaurant is outstanding and well worth the mention. The inviting atmosphere of the restaurant makes for some of the best fado in Lisbon. While it is possible to get a table without a reservation, I would definitely recommend calling ahead to avoid disappointment. 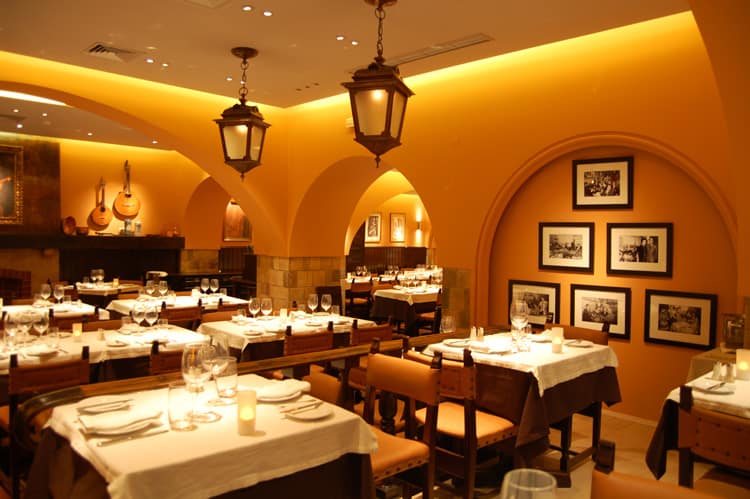 While the experience can only be described as out of this world, the prices can be quite hefty. Although every cent is worth it, it is not the most affordable fado bar Lisbon offers. The price is set and mandatory upon arrival. Included in the cost are the performance and the meal. This price varies per night – another reason to call ahead.

Located in the heart of Alfama, and a stone’s throw away from Lisbon Cathedral, Clube de Fado welcomes locals and tourists alike for an unforgettable fado performance. The venue has even been visited by the likes of Christiano Ronaldo and Richard Branson. 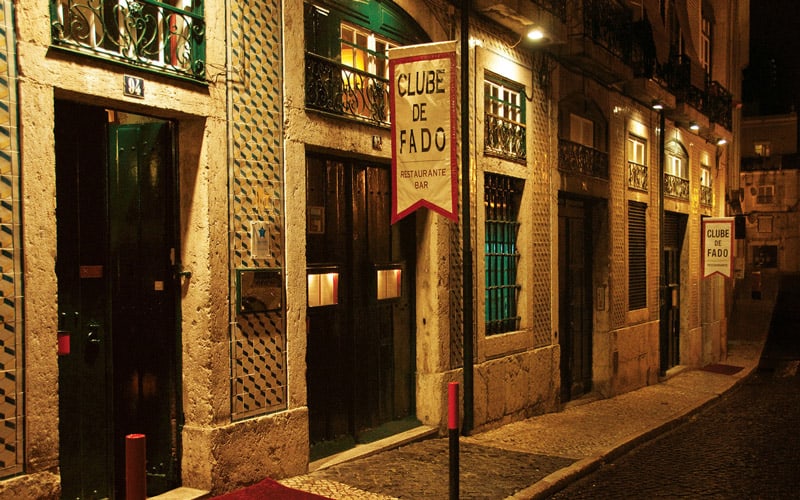 Enjoy a magical night being enthralled by the great talents of fado musicians as you indulge in your choice of whatever dish you desire on the menu. Sip on traditional Portuguese wine as you get swept away in the story-telling songs of local artists.

Service is paused during the performance so as not to distract from the artist, allowing guests to really focus on the beautiful music. With amazing music, delicious food and friendly service, a visit to Clube de Fado will have you singing yourself all of the way home at the end of the night.

The Tasca do Chico

Tasca do Chico is a dark, cozy, traditional bar that boasts some of the best fado Lisbon has to offer. In addition to authentic, moving fado music, the bar also features an incredible menu.

Snack on roasted chorizo, grilled pork sausage, and Alentejo cheeses, washing it down with a glass (or two) of silky sangria. While the original fado house is based in the vibrant area of Bairro Alto, demand has led to another Tasca do Chico to open in Alfama (Rua dos Remédios 83) which serves tasty bacalhau roast and the pastéis of cod.

However, the real reason for the popularity of the bar is not the rustic Portuguese food, but rather the incredible sounds of fado. Open every night of the week from 7 pm, you can enjoy being serenaded by local music until 2 am during the week and 3 am on the weekend. 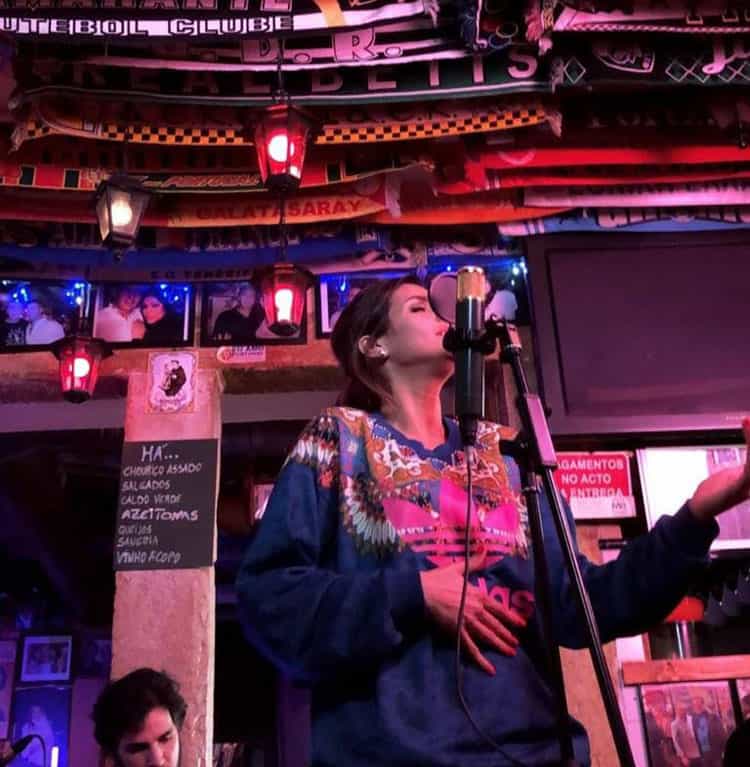 It only takes one minute of listening to the touching music to realize that the venue is possibly the best fado house Lisbon boasts. The small bar encourages visitors to share tables with their neighbors and bond in the experience with those around them.

Unlike many other fado bars in the city, Tasca do Chico is very well-priced while offering some of the most authentic fado in Lisbon. 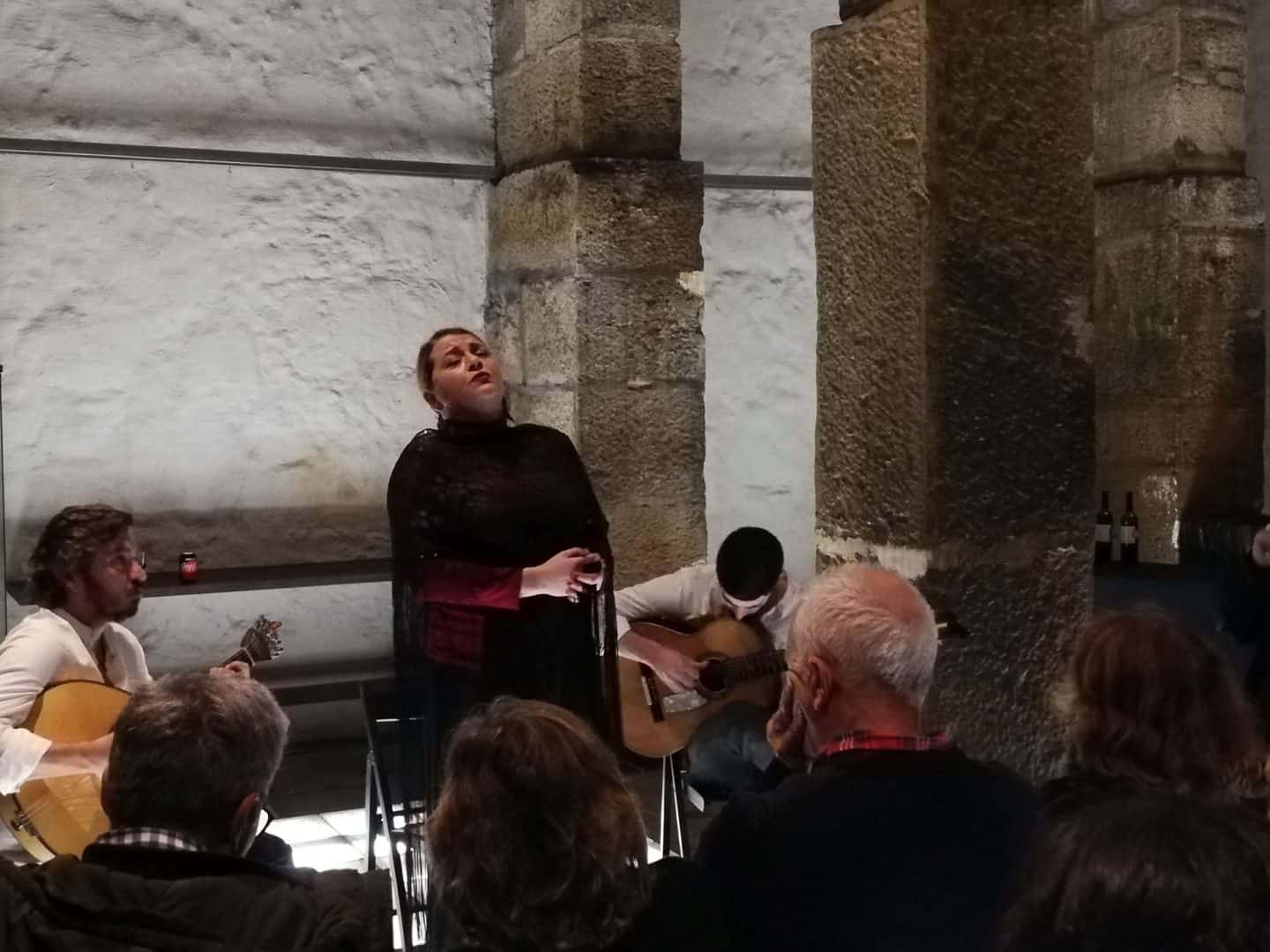 Wendy Werneth from The Nomadic Vegan

I’ve lived in Lisbon for more than two years now and am a huge fan of fado, but I almost never go to fado restaurants, or “casas de fado”. I actually don’t recommend them if, like me, you are vegan or have other special dietary needs.

Don’t get me wrong; the quality of the performances at casas de fado are very good. But they are quite expensive, and the food is usually pretty mediocre. The menus are also focused on traditional Portuguese cuisine, so if that doesn’t fit your diet then you are out of luck.

Rather than overpaying for bad food, I prefer to buy a ticket to a concert instead, where I know that the money goes to the musicians. Then afterward, I can go for dinner at one of the many Lisbon restaurants that serve vegan food at reasonable prices.

An organization called Real Fado puts on fado concerts three nights per week in beautiful, atmospheric venues around Lisbon that most tourists don’t know about. Every Tuesday at 7 pm, they host a traditional fado concert at Pavilhão Chinês, an iconic bar filled with vintage items and pieces of art. On Sundays, the concerts are inside Embaixada, a boutique shopping gallery decorated in a Hispano-Arabic style.

And on Fridays, the concerts go underground, inside an old cistern known as the Reservatório da Patriarcal. Whereas the Tuesday and Sunday concerts are pure fado, the Friday concerts are dubbed “Fado & Other Sounds” and feature a fusion between fado and other musical genres. They take place in an intimate setting that has wonderful acoustics.

If what you are really interested in is the music, then a Real Fado concert is a wonderful way to experience it! 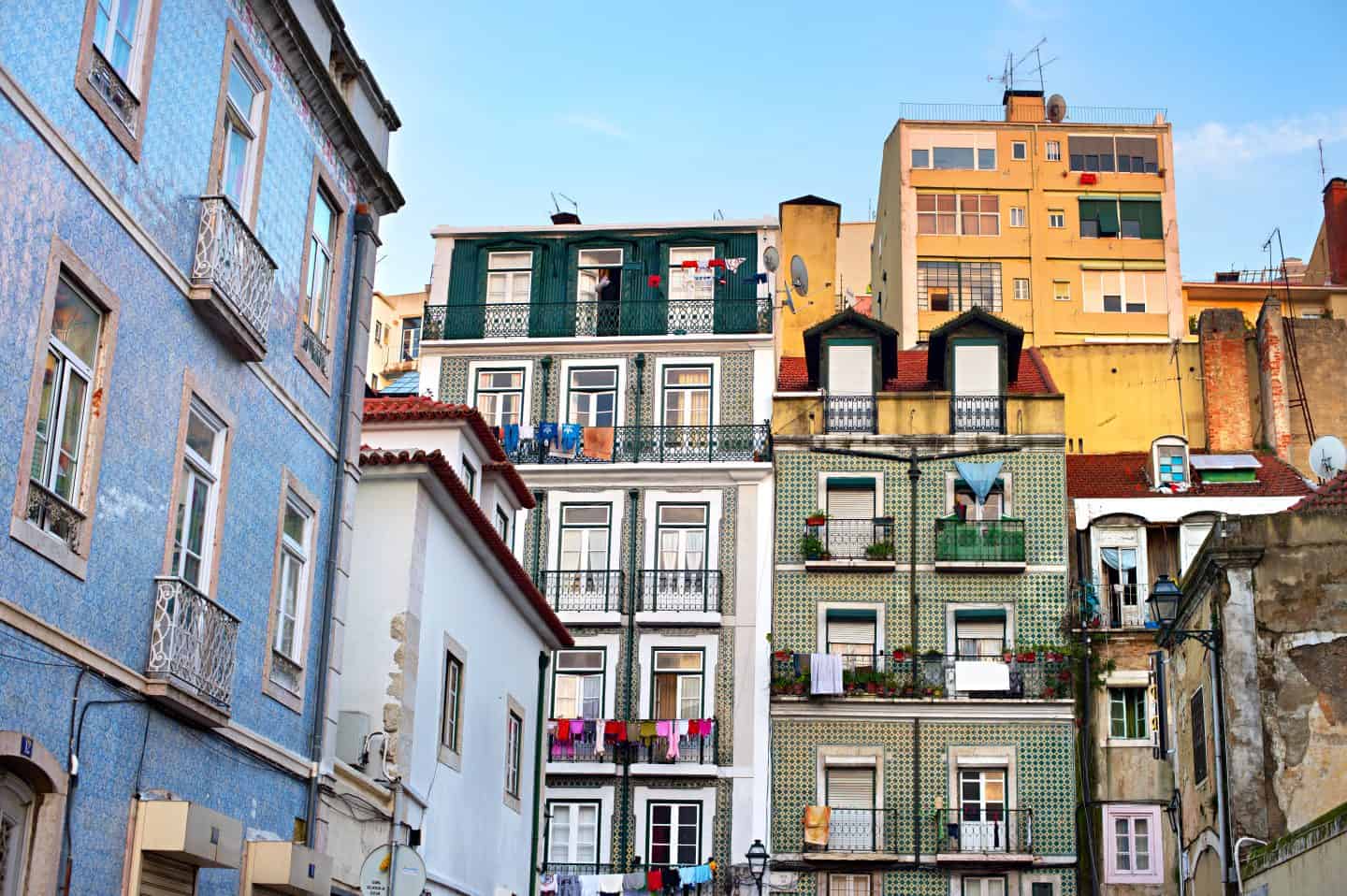 Final Thoughts On Fado In Lisbon

Lisbon is arguably one of the most beautiful places to visit in Europe, so it is no wonder that it is on the top of the bucket list for countless travelers. If you find yourself in the ancient city, be sure to write up a ‘must-see’ list that includes a fado restaurant for some of the best fado Lisboa.

As the birthplace of the iconic music genre, Lisbon promises an authentic and deeply heartfelt fado experience. The great news is that there are a variety of venues to choose from – some offering a full dinner, and others only requiring the purchase of a refreshing beverage from the bar. One suggestion is to pop into a fado bar, absorb the incredible experience of the music, and then move on to one of Lisbon’s amazing restaurants for some authentic Portuguese food.

Regardless of how you choose to experience the mesmerizing music, you’ll be in for a treat. So, pick your fado restaurant in Lisbon, sit back with a glass of wine and prepare to be swept away. 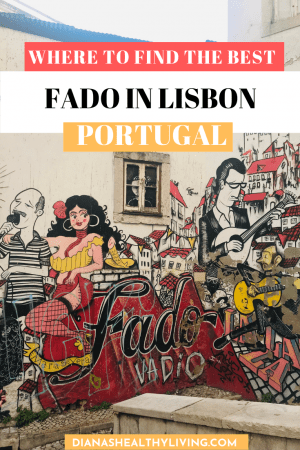 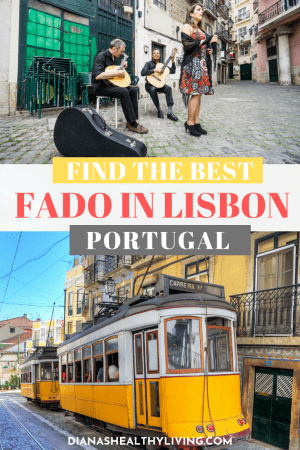 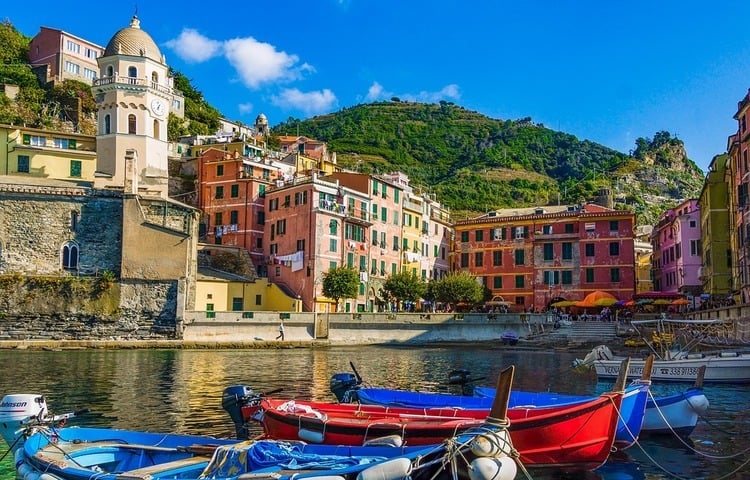 ← Previous
Where to Stay in Cinque Terre 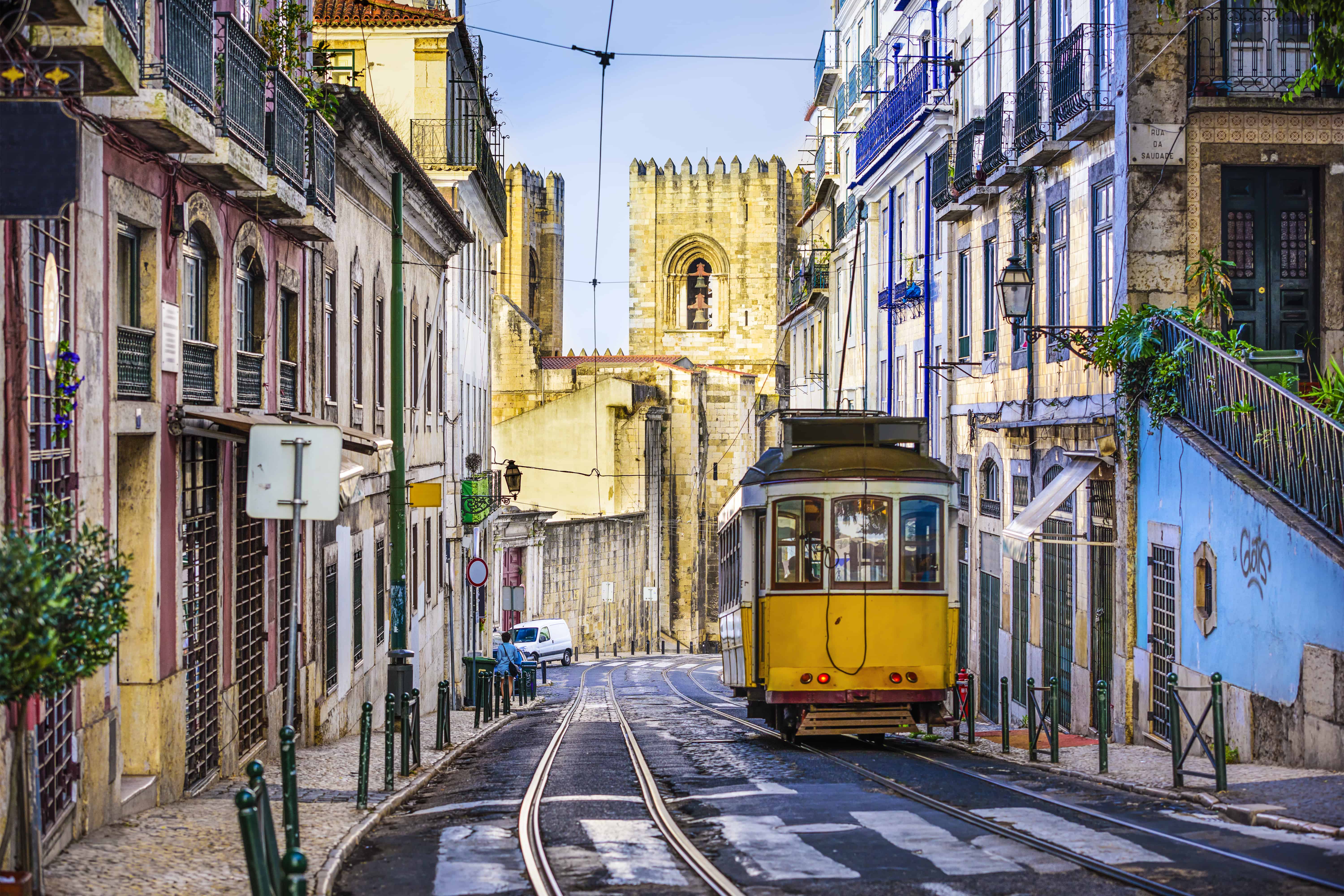