Though Philadelphia may not have the attitude of New York, nor the glamor of Los Angeles, this Pennsylvanian city holds an integral place in American history and certainly deserves a place on any United States trip itinerary, whether you’re traveling within the country or visiting from abroad.

It was in Philadelphia that the Founding Fathers signed the United States Declaration of Independence and drafted the Constitution (at what is now Independence Hall, to be exact). Therefore, Philadelphia is bursting with important landmarks, historic buildings and other significant places to visit.

Disclaimer: This post may contain affiliate links. All this means is that we will make a small commission at absolutely no cost to you! This helps us be able to continue to run Diana’s Healthy Living and we thank you for your help!

Philadelphia is a city steeped in history and there are many historic landmarks, buildings, and monuments to visit to learn more about America’s past and present. Here are just a few sites to add to your itinerary if you’re looking for a lesson in history:

Liberty Bell is a national symbol of freedom, bearing the message: “Proclaim Liberty Throughout All the Land Unto All the Inhabitants Thereof,” – a quote taken from the King James Bible.

The bell dates back to the 1750s and once rang in the tower of Pennsylvania State House (now Independence Hall). Its peal would call lawmakers to meetings and summon townspeople to hear the news. Later, the bell’s image would be used in the anti-slavery movement, Civil Rights and Women’s Suffrage.

Liberty Bell is famed for its crack, which sadly renders the bell silent. The crack likely developed in the 1840s and widened over time.

The Liberty Bell Center is open from 9 am to 5 pm, and is free to visit.

The historic Eastern State Penitentiary first opened in 1829 with the aim to reform criminals through isolation – it was the most expensive building ever built in the country at the time. Famous inmates over the decades included “Slick Willie” Sutton (a bank robber) and notorious gangster Al Capone.

After 142 years as an active prison, Eastern State was closed in 1971, but is now known as a national landmark, noted for its Gothic architecture, as well as the Quaker-inspired philosophy that solitary confinement could reform criminals.

The prison’s legacy lives on and it’s estimated that over 300 prisons all around the world have used its blueprint.

One of the most historically significant buildings in the country, Philadelphia’s Independence Hall is the birthplace of the United States. It was here that the Declaration of Independence was signed in 1776 and also where the U.S. Constitution was created.

Today, the landmark is a designated UNESCO World Heritage Site and stands proudly in the center of Independence National Historical Park.

The Independence Hall is open from 9am to 5pm. Tickets are required from March to December, aside from holidays such as Thanksgiving, Christmas Eve (December 24th) and Independence Day (July 4th). Guided tours are available but tend to fill up fast, so it’s best to book in advance.

Along with history comes a legacy of great examples of architecture, iconic buildings and even Hollywood movies that put some of Philadelphia’s most well-known landmarks on the national map. Here are just a few of the most famous buildings to visit in the city:

The mile-long Benjamin Franklin Parkway is the city’s answer to a Champs Elysees, home to many of Philadelphia’s most iconic landmarks and attractions, including museums and parks.

Wander down to find the museum that speaks most to your tastes and preferences. Buildings to look out for include the Philadelphia Museum of Art, the Rodin Museum, The Franklin Institute, the Barnes Foundation and the Academy of Natural Sciences.

One of the most important and largest art museums in the United States, the Philadelphia Museum of Art can be found on the famous Benjamin Franklin Parkway. In 1867, the museum originally opened for the Centennial Expo in the city, and an additional building was later added in 1928.

The museum’s expansive collection includes over 240,000 works of art spanning an incredible 2,000 years of human history, sourced from all over the world. Work your way through time from the ancient world right up to present-day contemporary pieces, while spotting famous paintings by world-renowned artists such as Renoir, Picasso, and van Gogh, along the way.

The Philadelphia Museum of Art is open from 10 am to 5 pm on Saturday, Sunday, Tuesday and Thursday, and from 8.45 pm on Wednesday and Friday. The museum is closed on Mondays, Independence Day, Thanksgiving and Christmas (though open all other public holidays).

General admission tickets cost $25 for adults, $23 for seniors, $14 for students who present a valid ID, but is free for children 18 years old and under.

On the first Sunday of every month and every Wednesday from 5 pm – 8:45 pm, there is a “Pay What You Wish” scheme in place, making the museum’s impressive collection of art accessible to everyone. 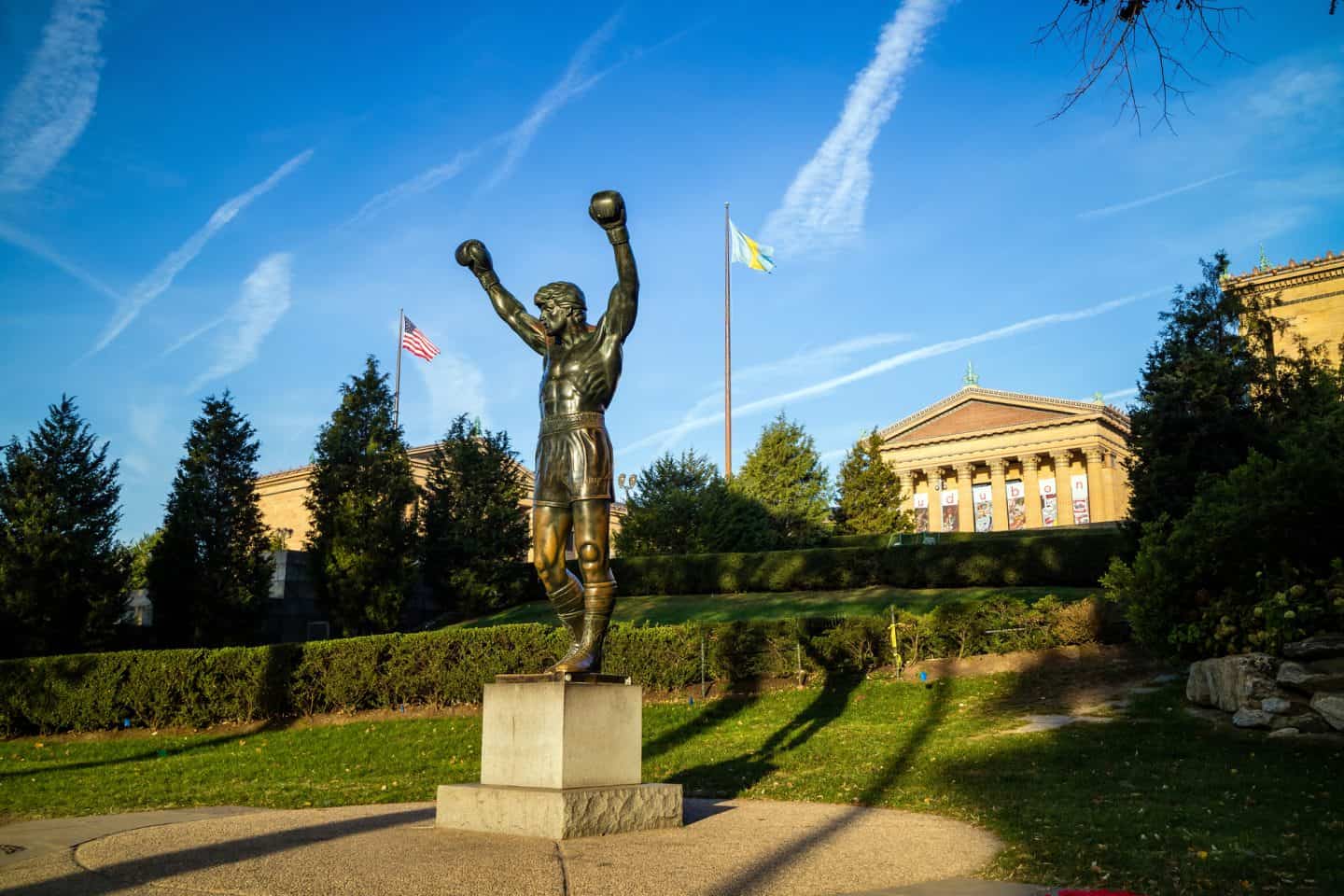 Run up the “Rocky Steps” and Pose with the Rocky Statue

The steps leading up to the Philadelphia Museum of Art were made famous by the movie Rocky in 1976, where the hero is seen in a training montage that ends with him scaling the staircase and cheering from the top, looking out to Benjamin Franklin Parkway and the city’s skyline.

There’s also a bronze statue of Rocky at the bottom of the stairs, which was originally created for Rocky III.

Philadelphia’s historic City Hall building is the largest municipal building in the United States and was the tallest building in the country when it was first built. City Hall has housed the city’s government for over 100 years and is also home to an impressive number of sculptures.

The City Hall Visitor Center is open from 9 am to 5 pm Monday to Friday and some Saturdays from 11 am to 4 pm. There are tours of the interiors (history, art, and architecture) and of the tower, though it’s best to purchase tickets online in advance.

Another amazing art venue to add to your Philadelphia itinerary is the Barnes Foundation, which houses one of the world’s best collections of French impressionist and post-impressionist art.

Opened in 1922, the gallery includes 181 Renoir paintings (more than anywhere else in the world), 69 pieces by Cézanne (more than there are in all of France), 59 Matisses, as well as recognizable artworks by Picasso, Degas, Manet and more.

There is also a space for temporary exhibitions, which follow a theme and ensure that you get to experience something different every time you visit the Barnes Foundation.

The building itself is instantly recognizable, covering 93,000 square feet of exhibition space over two floors. The textured grey-and-gold Ramon limestone coats the exteriors, while the glass canopy glows after dark. There’s also a “green roof” and other permeable surfaces, which collect rain and gray water as part of an initiative to make the museum more sustainable.

The Barnes Foundation is open from 11 am to 5pm from Wednesday to Monday (closed on Tuesdays). Admission is $25 for adults, $23 for seniors, $5 for college students with a valid ID, $5 for teenagers (13 to 18 years old) and free for children aged 12 and under.

On the first Sunday of every month, there is free admission, plus child-friendly activities, lectures, performance art and other things going on. Similarly, every first Friday evening of the month, there is a laidback event with cocktails, talks and after-hours access to special exhibitions.

Other Landmarks in Philadelphia

Of course, the term “landmark” isn’t just applicable to historic buildings, monuments, and museums, but also places that hold a special place in the heart of locals living in the city today. Here are a few of Philadelphia’s more modern landmarks, as well as historic places that are still used today:

Thought to be the country’s oldest farmers’ market, Reading Terminal Market is as much a historic landmark as it is a foodie haven. With a history of 125 years, the market serves up fresh, local produce, including groceries, hot food to dine in with, as well as other items, such as houseware and jewelry.

If you’re having trouble deciding what you fancy, here are just a few of Reading Terminal Market’s most famous vendors:

Run by Amish and Mennonite families, this dessert stall is famous for its apple dumplings. Apples are peeled, cored, covered in a sugar-cinnamon mix, then baked in pastry until the fruit softens. Add ice cream or pouring cream to serve.

Originally named the Delaware River Bridge, this large steel suspension bridge opened in 1926 to connect Philadelphia, Pennsylvania with Camden, New Jersey, via the Delaware River. Its construction was part of the Sesquicentennial Expo (150 years since the Declaration of Independence was signed).

When it first opened, the structure was the longest single-span of suspension bridge on the planet. Today, it’s a key landmark that symbolizes the city of Philadelphia and makes for an excellent backdrop in photos, particularly at sunset or sunrise. The best views of the Benjamin Franklin Bridge are from the waterfront.

Inspired by Philadelphia’s nickname, The City of Brotherly Love, the LOVE statue is an iconic work by Robert Indiana, inaugurated in 1976. The monument sits in John F. Kennedy Plaza (more often referred to simply as LOVE Park).

There’s also a Spanish version, AMOR, which can be found in Sister Cities Park, just a short walk away.

Things to Do in Downtown Philadelphia

Having navigated your way around the city of Philadelphia and ticked off the state’s most well-known places to visit, you can now turn your focus to entertainment and enjoying the Philly vibe. Here are a few things to do while you’re in town:

In terms of new landmarks and places of interest to visit in Philadelphia, the Delaware River waterfront has undergone a vast transformation in the 21st Century. Stretching over districts such as Society Hill, Old City, Northern Liberties, Queen Village, Fishtown and Pennsport, there’s plenty to see and do here.

Chill out in Spruce Street Harbor Park or down at Race Street Pier. Catch an alfresco music concert in the Great Plaza, roll the dice at Rivers Casino, or learn about maritime history at the Independence Seaport Museum. Or, simply enjoy the view of Benjamin Franklin Bridge.

One great area to visit at the Delaware River Waterfront is Penn’s Landing. Right on the riverbank, you’ll find lots to enjoy here, from events and festivals to fun activities such as yoga or roller-skating, to public spaces to just unwind with beers and friends.

Don’t leave Philadelphia without trying the city’s signature dish, the Philly cheesesteak. This sandwich is comprised of chopped steak pieces, a selection of cheeses (provolone, American, or Whiz) and fried onions.

Ask any Philly local and they’re sure to give you their personal recommendation for their favorite cheesesteak spot, but for classic options head to the corner of South 9th Street and Passyunk Avenue, which is home to two rival cheesesteak joints: Geno’s Steaks and Pat’s King of Steaks.

More Landmarks to Visit in Philadelphia

How did you find this guide to the best landmarks to visit in Philadelphia? Were these suggestions helpful, or in any way surprising? If you’re Philly born and raised do you think this list of places to see in the city is accurate, or do you have more to add? Let us know in the comments below.