Looking for the top waterfalls in Croatia? Croatia is a country renowned for its natural beauty, from idyllic islands to rugged coastline, to dense forests and undulating landscapes, sprinkled with authentic, rural towns. One of Croatia’s greatest treasures is its collection of waterfalls, which flow freely in some of the nation’s most famous national parks, as well as in the countryside.

The Top Waterfalls in Croatia to Visit

This guide to Croatia’s top 15 waterfalls narrows down the impressive collection to just a handful of recommended falls to visit, explaining why each of the falls are worth the trip, where they are located (five of them can be found in Plitvice Lakes National Parks, while a further two are situated in Krka National Park!), their special features, as well as any other interesting things you can find in their vicinity.

Here they are, roughly listed from north to south:

Located in northwest Istria, the nearest village to the Butori Ponor is Momjan, and you may want to set out to chase the falls with a guide, as these petite cascades can be hard to find if you’re not familiar with the area.

The mysterious Butori Ponor is a karst formation hidden in the forest, with a waterfall fed by the Jogov Creek. The falls plummet 10 meters down into a pool, seemingly disappearing into the abyss, which gives the falls a truly enchanting ambiance.

In fact, the waterfall’s meditative sounds of falling water and dreamy atmosphere have inspired local artists. Since 2011, every August there is a Meeting of the Forest Poets, who come to the clearing above Butori and stay well into the night, aided by bonfires, torches, and lamps. The mulberry tree found near the falls was planted during the first session, a decade ago, and is a symbol of the annual event.

Located in Pula, along the Mirna River, and about an hour east of Butori Ponor by car, Kotli is one of the country’s most well-known waterfalls, formed by the cauldron-like stone hollows that give the village of Kotli its name (kotao means cauldron).

One reason the falls are so famous is due to the region’s history of milling and tailoring; the falls once powered water mills that kept the industry thriving until 1964, and they have been preserved to this day. In general, the village has a rural, 19th-century aesthetic of stone houses, pretty courtyards, arched passageways and winding staircases – preserved because of the village’s isolation.

Kotli can be popular with visitors, especially in the spring and summer.

Half an hour by car from Kotli is where you can find Zarecki Krov. The Pazinicia River fuels the Zarecki Krov Waterfall, also known as the Pazin Waterfall. The pretty falls are located in the village of Zarecje, in the heart of Istria. The name Zarecki Krov means “Zarecki Roof”, in reference to the wide rock platform that hangs over the bright green pool below (deep enough for safe cliff jumping, plus the cool cave formed there can also be explored).

Far less famous than the waterfalls of Plitvice or Krka, there’s a good chance you can enjoy Zarecki Krov all to yourself, even in the busy summer months.

Only a 20-minute drive from Zarecki Krov, Gologoricki Dol is actually located within a farm, in an area of Istria populated by country hamlets. The falls can be reached by coach, horse, or on foot from the nearest town, Cerovlje, which is three miles away.

Gologoricki Dol is popular with both tourists and locals, especially in the hot summer months, as the pool at the bottom of the falls makes for a refreshing dip.

The River Mrežnica carves a deep canyon through Karlovac County’s rolling hills, fed by mountain springs, which creates a variety of different waterfalls along its length – said to be the best series of waterfalls in the country.

The Slapovi Mrežnice are a series of 93 low waterfalls along the River Mrežnica, which extends for 39 miles along Croatia’s Karlovac County, making it perfect for water sports. Though not as scenic as many of Croatia’s other falls, Slapovi Mrežnice’s short, but wide, falls are best explored by raft.

Just a 20-minute drive southeast of Slapovi Mrežnice, the scenic and remote waterfalls of Rastočki Slapovi are situated at the convergence of the Slunj Cica and Korana rivers. Not often frequented by visitors, the closest city to the falls is Slunj, located on the road between Plitvice Lakes National Park and Zagreb, making it a great stop along the way, if either of those places are your destination. Rastočki Slapovi is just a short drive from the city center of Slunj.

The powerful torrents create tiered pools, smaller cascades, and rapids over the limestone plateau. Don’t miss the quaint old flour mill powered by the waterfall, still in use today. As the falls are so remote, it’s best to stay nearby in the rustic guesthouses available.

Plitvice Lakes National Park, the oldest and largest national park in Croatia, is also a designated UNESCO World Heritage Site, in part due to its incredible natural waterfalls, of which there are many.

The park’s 16 interconnected tufa lakes are the biggest draws for visitors, visually stunning in jewel tones of sapphire, turquoise, and aquamarine, depending on the day’s sunlight and the water’s ever-changing mineral content. These distinctive lakes are fed by runoff from the surrounding mountains, and tumble into each other via a gorgeous network of waterfalls.

The largest and most beautiful of the falls is Veliki Slap (Large Waterfall), which has a height of 78 meters, and is fed by the Plitvica Potok River. The jewel in the crown of the park’s waterfalls, Veliki Slap is unique within Plitvice Lake National Park, as many of the park’s other waterfalls are formed by waters flowing from upper to lower lakes, whereas these waterfalls were formed by the river.

Another of Plitvice’s magical waterfalls, Sastavci lies below the Large Waterfall on the edge of Novakovica Brod, along the Korana River, in the lower lakes area of the national park. Lesser known than the mighty Veliki Slap, Sastavci is no less charming and is renowned for its peaceful atmosphere, clear blue pools, and nearby hiking trails.

The impressive falls descend 26 meters, while the neighborly Veliki Falls can also be seen in the background. You can walk right over the falls, which are at their most beautiful in the morning when the gorge below is full of misty spray.

A third recommendation for chasing waterfalls in Plitvice Lakes National Park is Pevalekovi Slap, which is tucked away among the greenery, making it feel like a secret escape. Those who do venture to Pevalekovi Slap often describe it as their favorite of Plitvice’s falls.

Where Milanovac Lake meets Gavanovac Lake is where you’ll find Milka Trnina Waterfalls, a series of little cascades that run among the bushes, rocks, and trees that separate the two lakes. The falls are named for 19th-century soprano Milka Trnina (1863-1941), a Croatian opera singer who donated large sums of money to the preservation of the Plitvice Lakes area.

Another interesting fact about these falls is that there is a rare species of yew tree that grows in the vicinity, known as taxus baccata. Though watch out – most parts of the plant are poisonous and consuming the leaves can be fatal!

Hidden away up in the upper lakes area of Plitvice Lakes National Park, Mali Buk is a 30-minute hike from the park’s ferry dock, and perfect for those who prefer their falls remote and serene, well off the beaten path.

Although just five of Plitvice Lakes National Park’s many waterfalls made this list, other falls of note within the park include Veliki Prštavac Waterfall, Milanovački Slap, and Galovački Buk.

Situated at the border between Croatia and Bosnia-Herzegovina, Strbacki Buk lies on the Una River within Una National Park but isn’t strictly in Croatia proper. These waterfalls drop 24.5 meters and are very impressive – definitely a photo opportunity not to be missed.

Nearby the falls, there are the remains of prehistoric settlements, such as those made by the Japodes people (also known as Iapydes, who dwelt along the Adriatic coast and the Istrian peninsula from the 9th century for more than a millennium), which makes for a fascinating lesson in ancient history.

The rough waters of the River Zrmanja create around a dozen powerful torrents of falls en route to the sea, which are best enjoyed on a river rafting or kayaking excursion. The water is clear and warm, plus the falls are magnificent to behold, while the canyon runs are breathtaking. Visoki Buk is the highest and most beautiful of the Slapovi Zrmanje, and stands at 11 meters.

Rafting is best enjoyed in the colder months of the year when the water levels are highest. The slower pace of kayaking is best complemented by the warmer months, which bring out a more peaceful side of the river, especially in the calm, emerald waters of the 200-meter-deep canyon. Due to its changing nature, locals have nicknamed the river, “Beauty and the Beast.”

Located in Krka National Park, which runs from the Adriatic Sea to the mountains of central Dalmatia, the gorgeous waterfalls along the Krka River are the park’s main attractions, gushing 200 meters into a deep karstic canyon. The best and longest of the bunch is Skradinski Buk, renowned for its clear natural pool, high falls, impressive cascades, whirlpools, as well as picturesque surrounding flora.

One of the best ways to enjoy the falls is on arrival into Krka, by taking the bus and boat ride from the nearby town of Skradin, which arrives close to the waterfall.

There are also plenty of walking trails around Skradinski Buk and visitors are welcome to swim in the huge natural pools below the waterfall (a welcome reprieve from the heat in the summer months). The area around the seven waterfalls of the Krka River are known to have the second-highest abundance of lavender on the continent, though be aware that this also attracts a lot of bees and wasps!

Another of Krka’s fairytale waterfalls, Roški Slap is located right next to its big brother, Skradinski Buk, and is a favorite of visitors to the national park. Although the name comes from the Rog hill-fort ruins, Roški Slap is nicknamed “the necklace” due to its jewel-like draping series of cascades.

The sixth in a sequence of seven waterfalls along the Krka River, Roški Slap has an accumulative height of 22.5 meters, a length of 650 meters, and a breadth of approximately 450 at its widest. The main waterfall is at the end of the 650-meter barrier is the highest of the collection, with a height of 15 meters.

On the riverbanks, there are several mills that make use of the rushing water for energy, including a renovated pillar for wool production and a valjavica for washing fabrics, which emulate the region’s trade heritage. Elsewhere in terms of history, there’s a Roman road that goes over the falls.

Although this isn’t an extensive list of all the waterfalls to see in Croatia, this selection of 15 of the best offer everything from popular waterfalls found in the country’s famous national parks, to remote and secluded waterfalls hiding off the beaten track.

Did your favorite Croatian waterfall make the cut? Let us know your recommendations and suggestions for the above list in the comments below. Or, let us know if you found this guide to chasing Croatia’s most majestic waterfalls helpful in planning your trip to visit the country’s most scenic spots of natural beauty. 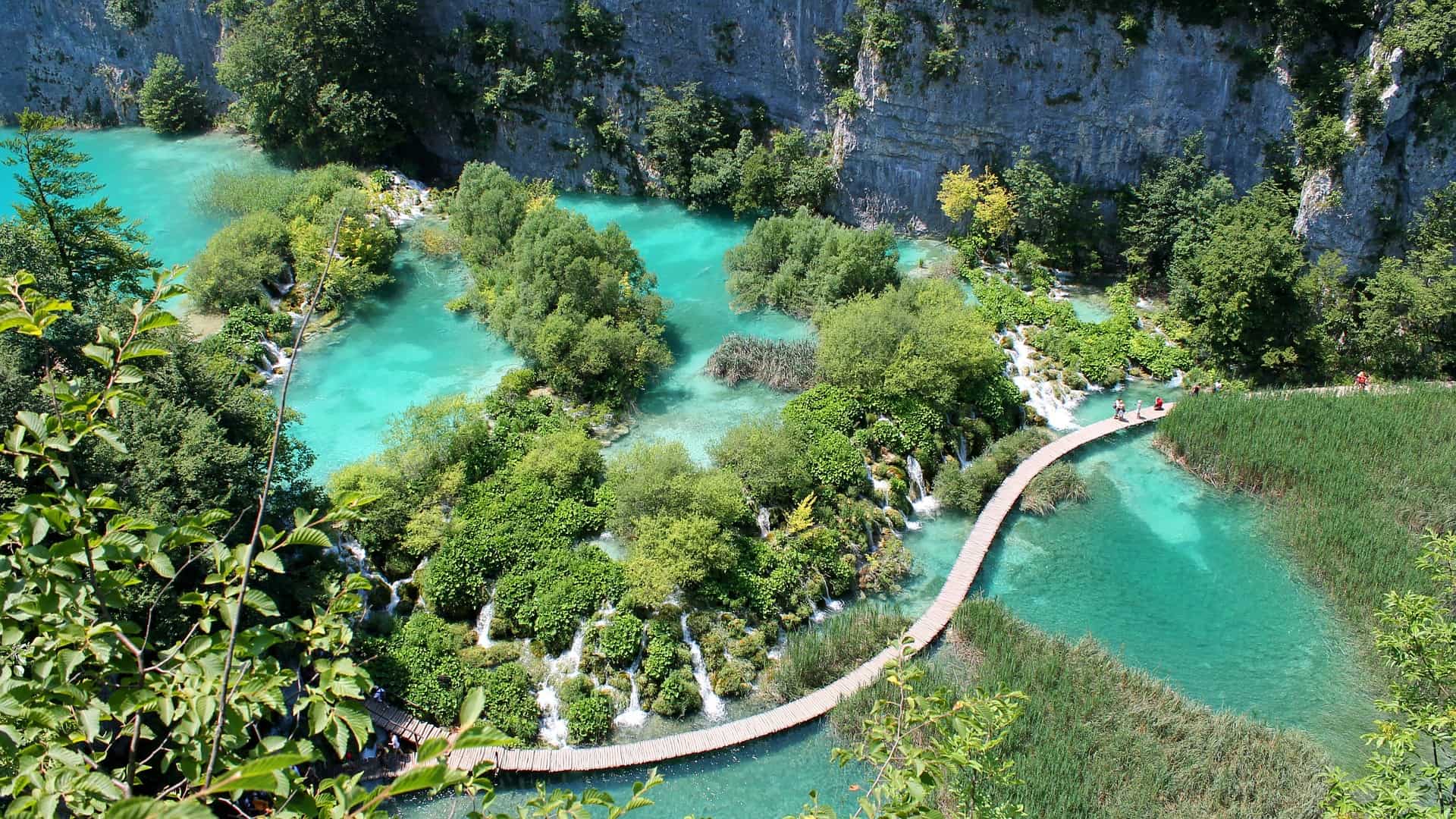 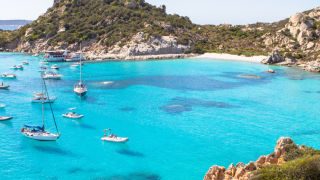 Next →
21 Best Islands in Europe To Visit