When you think of Croatia and you’ll likely conjure images of the fairytale turquoise pools of Plitvice National Park, the Games of the Thrones filming locations of picturesque Dubrovnik and the gorgeous seaside towns and islands that line the country’s coast.

Now, sprinkle some snow on that. That’s right – one of the best times to experience Croatia is in the winter (December to February, but especially December for Zabreb advent events). During this time, the capital of Croatia, Zagreb, transforms into a winter wonderland: Advent markets pop up across the city, trees are adorned with festive decorations and everyone is in a very good mood (albeit a little cold).

Here are nine suggestions for the best things to do in Zagreb in winter, which range from catching a classical ballet at a historic theatre to partying all night on New Year’s Eve to electro music. These are the best activities to enjoy in Zagreb during the wintertime:

Here are just a few of the most highly recommended Advent markets to attend around Zagreb:

A more modern and millennial twist on the traditional Advent market, the young and creative scene at European Square is home to concerts, exhibitions and what organizers have dubbed “urban flair.” Visit on Christmas Day or New Year’s Eve for the real party, where the crowds dance to electro music in their winter coats.

A great choice for families, Advent at the Klovićevi Dvori’s includes highlights such as workshops for all ages, free concerts in the evenings, wooden kiosks serving up seasonal food and drink, plus views of Upper Town and the Zagreb Cathedral.

Another great choice for families, the Advent market in Maksimir Park includes workshops, entertainment, photo installations (and Insta opportunities), food and drink, as well as festive decorations. Ideal for combining with a day trip out to the zoo.

Zagreb’s Upper Town is home to what feels like a Christmas village during December, with concerts and entertainment, artsy workshops, excellent food and drink stalls (try a craft beer or steaming mulled wine), as well as gorgeous views of the city by day, or lit up with Christmas lights by night.

Graze the market stalls on tree-lined Zrinjevac selling traditional Croatian cuisine, such as goulash, smoked pork and homemade pasta with cabbage (plus a dessert of strudel), while listening to live music and enjoying the twinkling fairy lights hung above in the tree branches.

Advent markets are open throughout the month of December every day (including Christmas Eve, Christmas Day, New Year’s Eve and New Year’s Day) until early January.

The word “Fuliranje” literally translates as “fooling around” and that’s exactly what this Advent event is all about – getting you to celebrate the holidays with a good old song and dance! Music ranges from jazz to disco, boasting 16 different live events and 35+ DJs.

There’s also food and drink available, some of which are provided by Zagreb’s leading restaurants, plus photo opp stations and even a special pet corner, so your furry pal can enjoy the festivities too. The best part? Admission is totally free.

3. Skate at the Ice Park

Head to King Tomislav Square and you’ll discover that the Zagreb landmark has turned into a winter wonderland. Participate in outdoor skating to get in the festive mood (don’t worry if you’re a beginner – there are knowledgeable and experienced instructors available to help you if need) and you’ll feel like you’ve skating right into a fairytale.

Music plays in the evenings, between 7 pm and 10 pm (the Ice Park is open until 11 pm most evenings).

4. Watch The Nutcracker at the Croatian National Theatre

The Nutcracker is the world’s favorite ballet, holding the title of being the most frequently performed ballet in the world. Based on the E. T. A. Hoffman story “The Nutcracker and The Mouse King,” the ballet was originally performed in 1892 in Russia, accompanied by the instantly recognizable score by composer Pyotr Ilyich Tchaikovsky.

The original production didn’t see that much success, but the music became very popular and the ballet has been a permanent fixture on the global theatre calendar since the 1960s. (It’s said that major American ballet companies make 40% of the annual income from The Nutcracker performances.)

The famous festive ballet first came to Zagreb in the 1920s and is usually performed during the Christmas period at the Croatian National Theatre. Seats cost between 90 and 160 Kuna, depending on the seat type, with daily shows to choose from (be sure to book well in advance, though).

For those unfamiliar, the story of The Nutcracker follows a young girl named Clara, who attends a Christmas party with her family. The mysterious toymaker and magician, Drosselmeyer, give out toys to the children and gives a wooden nutcracker to Clara and her brother Fritz, who quickly breaks it.

Once everyone has gone to bed, Clara returns to check on her broken nutcracker doll. The clock strikes midnight and the real magic begins; the Christmas tree grows, as does the nutcracker until Clara finds herself in a battle between gingerbread soldiers and the Mouse King. Just as the Mouse King has the nutcracker cornered, Clara throws her slipper at the enemy and saves the day.

The second act takes things to the next level of whimsical and bizarre with a visit to the Land of Sweets, ruled by the twinkle-toed Sugar Plum Fairy. Clara watches various sweets dance as a reward for her bravery and defeat of the Mouse King before everyone says farewell and the nutcracker kisses Clara goodbye.

Was it all just a dream, or was it really magic?

Just 20 minutes outside the city center you’ll find the snowy peak of Mountain Medvednica and the ski resort of Sjleme – the perfect choice for a day hitting the slopes.

However, if the thought of donning a pair of skis and plummeting down a mountain doesn’t fill you with excitement, then there’s always the more strenuous option of walking up Sjleme (the snowy mountain views are spectacular) or the less strenuous option of a cozy lunch at the mountain-top tavern.

Take a day trip to Plitvice National Park from Zagreb and you’ll be rewarded with a trip to real-life Narnia. Just a few hours from the capital city, the park can be reached easily by car (along the A1 Zagreb-Split motorway) or bus (eight to ten daily, though you may prefer to book on a tour).

The 16 UNESCO-protected Plitvice Lakes are better known for their colorful summertime beauty, but there’s something even more magical about the lakes once they freeze over, covered in a dusting of snow and frost, plus icicles galore (great for nature photographers).

The park also receives far fewer visitors in winter, so you might feel like you have the place all to yourself. Just make sure you wrap up warm – average temperatures in winter hover around 2 degrees Celsius!

Although tickets for the national park cost 110 Kuna in spring and autumn, and 180 Kuna in the height of summer, in winter they’ll only set you back 55 kuna, which also includes all buses and ferries within the park itself. Parking can be found at Entrances 1 and 2, costing 7 Kuna per hour. 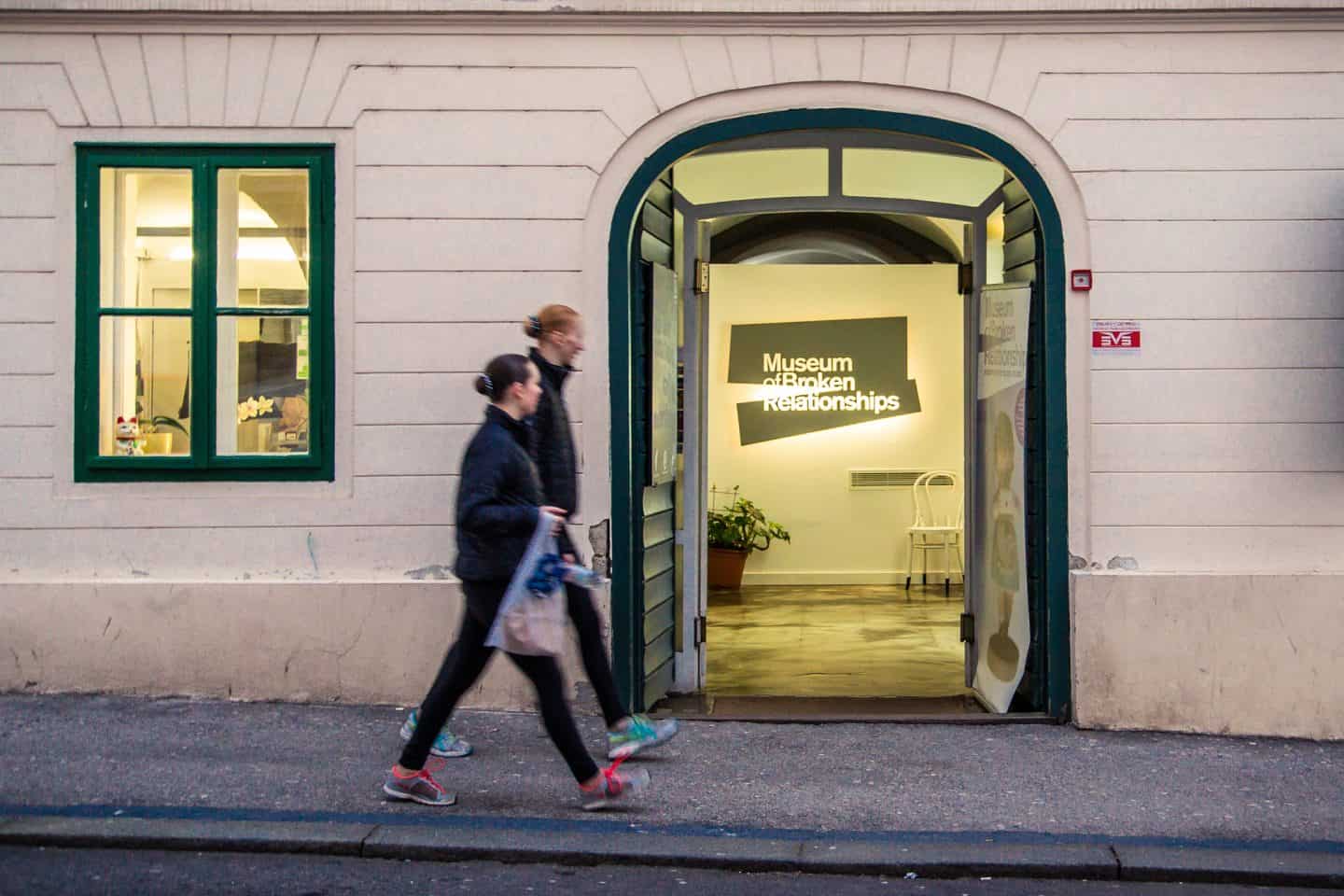 7. Contemplate at the Museum of Broken Relationships

This may sound like a weird addition to the list of things to do in Zagreb in winter, but there’s a reason for the madness. Not only is the museum the most visited attraction in the capital, but it’s also indoors (a great place to warm up) and somewhere you can contemplate the year past and the year ahead.

Whether you’ve recently ended a relationship, you’re feeling a little nostalgic, or none of the above, this museum is sure to find your emotional Achilles’ heel with its collection of “brokenship” items and their sad stories, which leave visitors with a bittersweet aftertaste and plenty to think about.

The Museum of Broken Relationships was founded by two Zagreb-based artists who ended their four-year relationship and came up with the idea of a museum to house leftover personal items. They asked for donations from friends and the museum’s collection was born.

The collection toured the globe, receiving more and more donations until it returned to Zagreb and found a permanent home in the city’s Upper Town. Today, the idea has spawned and there’s now also a Museum of Broken Relationships in Hollywood, Los Angeles, as well as a Museum of Failure in Sweden.

The museum is open from 9 am to 9 pm in winter (last entry is at 8.30 pm) and tickets cost 40 Kuna, or 30 Kuna for students, people with disabilities and seniors.

8. Take a Dip in a Thermal Spa

Zagreb is home to a number of lovely spas, which are ideal for warming up on cold winter days and relaxing aching limbs after so much sightseeing. One of the most scenic and extensive is Terme Terje, located in Zagorje (around 50 kilometers from Zagreb, on the other side of Medvedgrad Mountain).

Bathe in 15,000 square meters of indoor and outdoor liquid space at the spa’s Water Planet, break a dry sweat at Sauna World, appreciate the Art&Spa story that blends design and architecture with wellness rituals and soak in the healing powers of thermal waters.

A multitude of packages are available, from just a few hours swimming to luxurious overnight stays complete with massage and pampering sessions.

9. Stay Warm with a Dram of Rakija

On the days when gloves and a woolly hat just won’t cut it, head to one of the capital’s rakija bars to drink the national spirit. This strong beverage contains around 40% alcohol, so watch how much you’re consuming, however, it is a common belief in Croatia that a dose of rakija will cure anything from a headache to bacterial infection, so you’re probably better off with a shot or two inside you.

Croatians take pride in their rakija (it’s said that if you haven’t tried homemade rakija, you haven’t tried rakija at all) and versions come in a wide variety of flavors using a diverse array of ingredients; anything from watermelon to pine tree to truffle – pretty much anything that can be fermented and distilled.

One of the best bars to try rakija at in Zagreb is Cica (don’t say it too loudly, the name means “breast” in Croatian) on Tkalčićeva Street near Ban Jelačić square. Rosebud and chestnut flavors are popular, though mind that there is very limited seating at this little bar.

Other Things to do in Zagreb in Winter

How did we do in listing the best things to do in Zagreb in the winter? If you found these recommendations useful, or if you have a few suggestions of your own to add to those above, leave a comment to let us know. And enjoy your trip (or trip down memory lane if you’ve already been!) to Zagreb, Croatia!

If you are planning a trip to Croatia, you may enjoy these articles:

Things to do in Hvar, Croatia

Enjoyed reading Things to do in Zagreb, Croatia, PIN IT!