The Land of Ice and Fire, of 24-hour darkness, Midnight Sun and the ethereal Northern Lights, where rich Viking heritage and folk tales of elves and trolls continue to enchant.

Also, the land of hot dogs, but no McDonald’s restaurants; Björk and book gifting, but also penis museums. Iceland is a nation of the weird and wondrous, and here are just a few fun facts about Iceland that attempt to scratch the surface of this fascinating and beautiful island.

Note: This page does contain affiliate links, if you book or buy something through one of these links, I may earn a small commission (at no extra cost to you!).

1. Where is Iceland located?

Iceland is an island located just below the Arctic Circle, between North America and mainland Europe, though it is officially a part of Europe.

2. Why is Iceland called Iceland?

The story goes that the Vikings who sailed from Norway and became the first inhabitants of Iceland and Greenland misnamed both in order to deter enemies – hoping they would go to ice-covered Greenland, rather than green Iceland!

3. What is the population of Iceland?

Iceland has a population of around 300,000 people.

To put that in perspective, that’s approximately 10% of the city of San Francisco, making the country one of the most sparsely populated in the world, with an average of eight people per square mile. About a third of the population live in the capital city, Reykjavik.

4. What is Iceland known for?

Nicknamed the “Land of Fire and Ice” Iceland is probably most famous for its active volcanoes and huge glaciers – it’s considered a place of incredible natural beauty and home to natural phenomena such as the Northern Lights, Midnight Sun, geysers and hot springs, as well as other volcanic activity. One of the best time to see the Northern lights would be to visit Iceland in March.

5. Iceland is one of the most eco-friendly countries in the world

Due to the volcanic activity on the island, Iceland mostly uses renewable hydro and geothermal energy. Homes are also heated by using geothermal water.

6. Iceland has one of the lowest crime rates in the world

So much so that the nation doesn’t have an army (it’s the only member of NATO not to have an army, air force or navy), police officers are unarmed and violent crime is almost unheard of.

7. There are no McDonald’s restaurants in Iceland

McDonald’s once had a presence in Reykjavik and was popular at first, but business soon went downhill. After the 2008 financial crash, the cost of imported goods skyrocketed and the McDonald’s branches eventually closed down.

Bizarrely, you can mourn the loss of this global chain by visiting the National Museum, where the last McDonald’s cheeseburger sold in Iceland is on display.

8. Whale, puffin, shark and ram’s testicles are staples of the Icelandic diet

Although these proteins may sound a little unappetizing to the rest of the world, the above animals (and their parts) feature prominently on many restaurant menus.

9. The most popular food in Iceland is the hot dog

Icelanders love a hot dog and it’s a must-try if you’re visiting the country. Icelandic hot dogs are often made from locally raised organic, free-range, grass-fed, hormone-free lamb, though sometimes pork and beef too. The meat casings are natural too, so this may well be the healthiest hot dog you’ve ever eaten!

Locally known as a pylsa or pulsa (though don’t get an Icelander started on the debate as to which is correct), the hot dog is served on a hot steamed bun and topped with raw and fried onion, ketchup, pylsusinnep (a kind of sweet brown mustard) and remoulade (a sauce made from mayonnaise, mustard, capers and herbs).

Hot dogs can be found everywhere, but one of the most famous hot dog stands in the country is Bæjarins Beztu Pylsur (“Best Hot Dogs in Town”), which has served up its delicious dogs since 1937. I would highly recommend joining a Reyjkavik Food Tour. It is a great way to try the local cuisine. Pre-book your Reykjavik Food Tour here.

10. Iceland has a national Beer Day

Alcohol was banned in in Iceland in 1908, though this was later amended to exclude imported wines. Instead, there was a ban on beer, which lasted for 74 years and finally came to an end in 1989.

To celebrate the end of this prohibition, an unofficial national Beer day holiday is held every year on March 1st and you’ll likely see locals out on a bar crawl in the capital on this day, making up for lost time.

11. Iceland’s water is so pure you can drink it straight from a river

The country’s tap water is drinkable, but taking things a step further – the water is so clean you can drink it straight from the river!

Icelandic culture has a rich storytelling tradition and most of the nation’s folk tales feature elves, trolls and the like. More than just stories, many Icelanders still believe in these fantastical beings, which were first used to explain Iceland’s natural phenomena and strange, yet beautiful, landscapes.

Here are just a few of the legendary creatures you may encounter during your Iceland trip:

If you’re interested in learning more about Iceland’s otherworldly inhabitants you can attend the Álfaskólinn (Elf School) in Reykjavik for a half-day course on everything elfin, which includes a text book you can take home for further reading.

13. Iceland is a nation of bookworms

Speaking of which, Iceland boasts the highest number of books per capita and around one in 10 Icelanders will publish a book during their lifetime!

One bookish Icelandic tradition is Jólabókaflóð, which relates to book gifting in the weeks leading up to Christmas. During December, authors publish, publishers market, bookstores hold parties, bars and cafes host readings, and everyone is a distinctly literary mood.

Perhaps the most famous Icelander, Björk Guðmundsdóttir was born in Reykjavik in 1965. Her four-decade career as a singer, songwriter and actress (as well as eccentric arts icon) has made her a household name all over the world.

Formed in Reykjavik in 1994, the dreamy, ambient music of Sigur Rós is instantly recognizable, helped in part by falsetto vocals and bowed guitar. Their most famous song, Hoppípolla (Hopping into puddles), is sung partly in Icelandic and partly in a nonsensical language the band has dubbed “Hopelandic.”

Another notable Icelandic band is Of Monsters and Men, an Indie folk/pop group that has been active since 2010. They first rose to prominence after winning a battle of the bands competition in Iceland. After releasing their debut EP, Into the Woods, they became known on the global stage.

Iceland was first inhabited by Vikings, who sailed over from Norway in the 9th century. In comparison to mainland Europe, this makes Iceland a relatively “young” country.

The horses found in Iceland are directly descended from the first horses that the Vikings brought over from Europe and have never mixed with other breeds. Therefore, these creatures have a unique look and movement that can’t be found in any other species on the planet.

The Alþingi parliamentary assembly ran until the 1800s, then was later moved to the capital city, Reykjavik. This also makes the Icelandic parliament one of the oldest in the world.

19. Iceland was the first country to democratically elect a woman and to have an openly gay Prime Minister

Vigdís Finnbogadóttir, the world’s first democratically elected female president served as the country’s fourth president from 1980 to 1996. Jóhanna Sigurðardóttir became Iceland’s first female Prime Minister in 2009, which also made her the first openly LGBTQ+ head of government in the world.

20. Iceland is one of only two places in the world where you can see tectonic plates meeting above the Earth’s surface.

Þingvellir National Park isn’t just designated a UNESCO World Heritage Site for its historic significance as the location of Europe’s first parliamentary ground, but also for its geographical importance.

Here, you can see the North American and Eurasian tectonic plates push up out of the ground and you can even go swimming, diving and snorkeling between the plates in Þingvallavatn Lake. The plates move apart around two centimeters each year.

21. There are more than 125 volcanoes in Iceland

As you may expect from somewhere famous for the meeting of tectonic plates, Iceland’s location on the Mid-Atlantic ridge means that it is home to a vast number of volcanoes, many of which are still active.

A volcanic eruption takes place around once every four years and much of the country’s land is covered in lava fields. If you love hiking then hiking Thorsmork Volcano is the ultimate bucket list item. Book your Thorsmork Volcano Hiking Tour Here.

22. There are no forests in Iceland

Iceland may be known for its natural beauty, but due to its volcanoes and glaciers, you’re not going to find are forests here. Plus, the Vikings harvested most of the trees they found when they arrived in the 9th century. That doesn’t mean you won’t find any trees at all, but you just won’t find dense woodland.

23. You can see the Northern Lights and the Midnight Sun in Iceland

However, this makes Iceland one of the best places to see the Northern Lights (especially in the darkness of winter), as well as the phenomenon of the Midnight Sun. Book your small group Northern Lights Tour here.

24. Iceland only has one native mammal

Due to the harsh climate and the island’s isolation, there are very few animal species in Iceland and none that are dangerous to humans. The country’s one native mammal is the Arctic fox, which arrived sometime during the Ice Age.

25. Icelandic hasn’t changed much over the centuries

Icelandic is similar to Danish and Norwegian, however the language is very unique. Unlike most languages, Icelandic has changed very little over time and Icelanders can still easily read texts written hundreds of years ago.

26. The word “geyser” is Icelandic

As a volcanic island, Iceland is home to more than a few geysers, but did you know that the English word geyser is originally borrowed from Icelandic? In Old Norse it was spelled as “geysa” and meant to rush or gush.

27. The Icelandic language is famous for long words 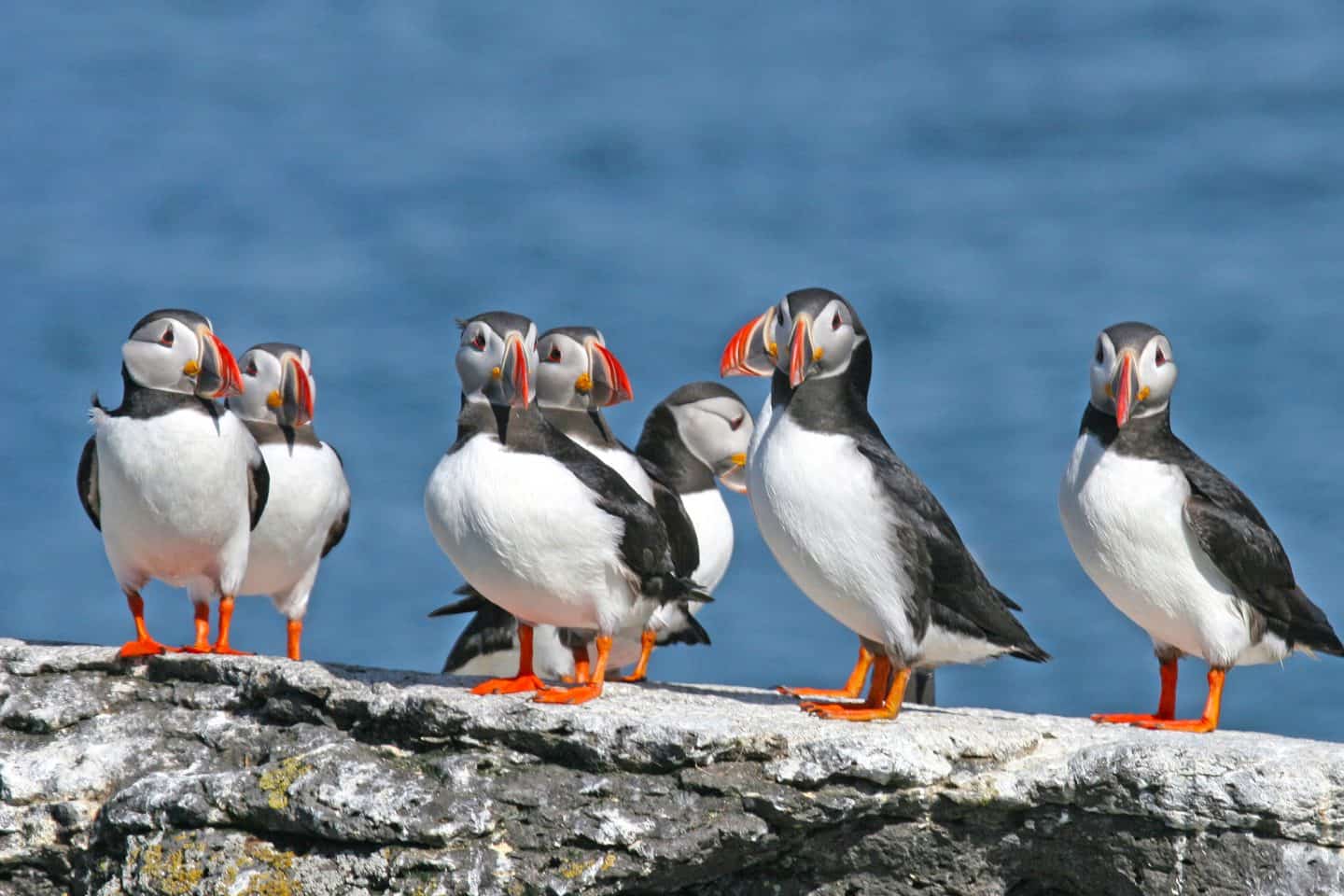 28. Iceland has a Personal Names Committee that approves people’s names

The Icelandic Naming Committee has an official register of approved Icelandic given names and decides which new names can be introduced into Icelandic culture.

Any name that is not on the official list must be submitted for approval and is judged on how compatible it is with Icelandic tradition, to ensure the name-holder will not endure embarrassment. At present there are around 1,700 male names and 1,850 female names, however in 2019 it was announced that given names are no longer restricted by gender.

29. Iceland has a penis museum

The Icelandic Phallaological Museum is the world’s largest collection of penises and penile parts with over 280 specimens taken from 93 animal species, including a donated human penis. Around 11,000 people visit the Reykjavik museum each year.

30. Most Icelanders are related to each other

With a small population and predominantly Viking heritage, Icelanders are more than likely related to their neighbors. A website called Íslendingabók is available for people to trace their lineage back to the Viking age, as well as see how they are related to people they may know!

Any fun facts about Iceland missing from the list above? Or are there any interesting Iceland facts in the 30 we chose that surprised you, or made you laugh? Let us know your favorite fact about Iceland in the comments below and enjoy your trip to the Land of Fire and Ice!