So, when is the best time to visit Iceland to see the Northern Lights? Which months of the year and times of the day offer the best Aurora Borealis views? And where is the best place to go within Iceland for optimal Northern Lights encounters?

** This post may contain affiliate links. Purchasing or booking through these links earns us a commission at no extra charge to you.

What are the Northern Lights?

In Norse mythology, they were thought to be the reflections of light of the armor of the Valkyries. In some Native American cultures, they were believed to be the spirits of the dead and the brighter they were, the happier the spirits were said to be in the afterlife. Medieval superstition considered them to be bad omens, prophesizing dark times ahead.

In slightly less romantic but more scientific terms, the Northern Lights are a reaction that occurs when electrically charged particles from the sun reach the Earth’s magnetic field.

The solar wind is pushed to the magnetic north and south poles and energy is released, ionizing the particles, which produces the colorful streaks across the sky.

The colors can be white, green, pink, red, orange, blue, or purple, depending on the elements being ionized. The intensity of these colors also depends on variables such as solar activity and the speed the particles are traveling at. Therefore, no two performances of the Northern Lights are the same.

Where and when can you see the Northern Lights in Iceland?

Aurora Borealis and its southern counterpart, Aurora Australis (the Southern Lights), only appear at the Earth’s poles, above and below the 60° latitude mark.

You can see the Northern Lights in many different countries and regions, including Alaska, Greenland, Iceland, Sweden, Finland, Norway, Russia, Canada and Scotland – though not all of these places offer perfect conditions for seeing the lights in person.

Sitting at a latitude of 64° north, Iceland is one of the best places in the world to see the Northern Lights in action and the incredible light show, run by Mother Nature herself, is what draws so many visitors to the country every year.

The best time to see the Northern Lights in Iceland

The Northern Lights are visible in Iceland during winter, as well as occasionally in autumn and spring; September to mid-April. This is solely because from mid-April to mid-August, Iceland’s high latitude means that the country has no or little darkness, so the lights cannot be seen during these months, even though the reaction is still happening.

The best time to see the Northern Lights in Iceland in terms of conditions is between November and February because these are the darkest months of the year and therefore there’s more of a chance of seeing the Aurora Borealis.

In terms of light activity, the Northern Lights are at their peak around the March and September equinoxes, however, darkness starts around 6 pm, so the window for seeing them is shorter. The Aurora Borealis needs three key things to appear: solar activity, darkness and clear skies (the latter of which is most likely when temperatures drop below freezing) – all of which are out of human control.

True to its name, Iceland’s weather during the winter months – we’re talking rain, snow and cloudy skies – means that seeing the Northern Lights can never truly be guaranteed. You’ll need to be patient and have a little bit of luck on your side.

Although difficult to predict more than two hours in advance, the Icelandic Met Office does a really good job of providing an aurora activity forecast as well as details of nightly cloud coverage, so you can check your travel dates for possible Northern Lights viewings.

The aurora forecast has a scale of 0 to 9, and anything above a 2 means promising conditions for Northern Lights sightings. 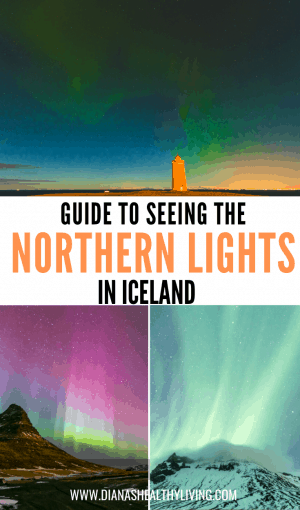 What time of day is best to see the Northern Lights in Iceland?

Technically, the Northern Lights can be seen at any time of day, as long as it’s dark. Yet, experts have reported that the hours between 9.30pm and 1am are the optimum time to see them.

How many nights should you stay in Iceland?

Again, though nothing can be guaranteed, it is known that the Northern Lights follow a slight pattern; they tend to be very active for two or three nights in a row, then not so active in the four or five nights that follow.

Therefore, it’s best to give yourself plenty of time in Iceland if you really want to make sure you get to see the full Aurora Borealis in the flesh – at least a week.

Can the Northern Lights be seen every year in Iceland?

The Northern Lights also follow an 11-year cycle, which relates to sunspots and other solar activity. When solar activity increases, so do the frequency and intensity of the aurorae.

2020 will likely see less frequent Northern Lights appearances and this will last until 2025 or 2026. After that, the Northern Lights will be back in full force. That doesn’t mean you need to delay your trip though – there’s still plenty of opportunities to see them, you just might need to give yourself more time in Iceland.

What about solar storms?

On top of patterns, cycles and variants in conditions, there is also the possibility of solar storms. Erratic and unpredictable, these increased periods in solar activity mean that the Northern Lights can be seen very far south, as long as there are clear night skies.

Where can you see the Northern Lights in Iceland?

The general rule is that the more remote your location, the better your view will be for any potential Northern Lights sightings. Light pollution from towns and cities don’t deter the lights, but they can obscure the view.

Don’t worry, you don’t have to be stranded in the middle of nowhere for a Northern Lights encounter. You might even be able to spot them from the plane window as you arrive or depart from Iceland at night!

No matter where you’re staying in the country, there are plenty of Northern Lights tours available, especially from the capital city of Reykjavik.

What’s more, many hotels provide a “wake-up” service, so if the Aurora Borealis decides to turn up in town one night, then you’ll be woken up to see them.

North Iceland also experiences approximately 22 hours of darkness at the winter equinox and also boasts clearer weather than southern Iceland, especially in the east. Therefore, conditions are slightly better here than in other places in the country.

If you’re traveling to Iceland on a budget, car rental or a tour may be too much of a stretch, but there are still plenty of places you can find in town to spot the Northern Lights. Parks such as Klambratun or Laugardalur are dark enough, as well as the forest near Perlan.

Alternatively, head to Grotta Lighthouse in the northwest of the city, on the Seltjarnarnes Peninsula (There’s also a geothermal pool there to dip your toes into!).

Note that there will always be some light pollution in or near the capital, so your view won’t be quite as picture-perfect as it would be in a rural area. If you are looking for places to stay then check Airbnb for affordable options and save $45 off your first booking.

If you’re traveling in Iceland during August, September, or April, then why not camp out under the stars somewhere remote – you may get a view of the Aurora Borealis all to yourself. Just make sure to wrap up warm!

If you’d rather get out of the capital to see the most bright and colorful versions of the Northern Lights, tours can be a great option, as the operators are experts in locating the best places to see the Northern Lights in Iceland and are the best judges of conditions. Here are a few ideas to get you started:

The Northern Lights Mystery Tour operates out of Reykjavik between August 24th and April 15th. This tour includes scientific explanations, myths, and stories about the lights, as well as a Northern Lights viewing. Prices start from €47 per person.

In the north of Iceland, try this epic tour in a 4×4 vehicle to Myvatn, which is nicknamed the “capital of the Northern Lights” because of the lack of light pollution in its wilderness. Operating between August 15th and April 1st, prices start from €117 per person. Book your Glacier hike and Northern lights tour here.

Northern Lights from the sea

Of course, the Northern Lights can be seen offshore as well and a Northern Lights by Boat tour will see you sail away from Reykjavik into the North Atlantic, away from the light pollution of the land – ideal for spotting Aurora Borealis. Tours operate between October and April and prices start from €80 per person.

Other cruise options are available from Akureyri and Reykjavik, which head out to Eyjafjordur or Faxafloi Bay. A Northern Lights tour via the ocean also doubles as a potential whale-watching trip, and you might spot white-beaked dolphins, harbor porpoises, minke whales and maybe even humpback whales (though they are more commonly seen in summer).

Often, if your cruise is canceled or you don’t see the Northern Lights during the tour, you’ll be offered a second chance for free. Book your Northern lights cruise here.

If you’d prefer to witness the spectacular vision that is the Northern Lights in a more private and personal way, you can always do your research, follow the advice of the Icelandic Met Office, find a spot and drive there yourself.

If you choose this option, be aware of the dangers of driving on dark and snowy nights in winter, especially when there’s a lot of ice on the roads between November and March.

If you’re aiming to head out into the snow on foot, make sure you’re wrapped up very warm, grab a strong torch (or two, with extra batteries) and aim for a secluded spot away from any impeding light pollution. Again, be aware of the risks of snow and ice, and stay safe.

How to photograph the Northern Lights

Notoriously difficult to capture on film, the Northern Lights are, of course, at their most impressive in person. So, don’t expect to grab a Northern Lights selfie or something for the ‘gram unless you have quality camera equipment.

You’ll need a tripod, cable release or the ability to set your camera’s self-timer to a shutter delay. Photographers report the best settings to be ISO between 800 and 3200, aperture between f/2.8 and f/5.6, and shutter speed between 15 and 30 seconds.

Just like catching the Northern Lights in the first instance, capturing them on film takes time, patience and a little bit of luck.

What is the best month to see Northern Lights in Iceland?

Peak viewing season for the northern lights is always September through March when the nights are long in Iceland (during the winter solstice, darkness can extend for approximately 19 hours).

Can you see Northern Lights from Reykjavik?

More on the Northern Lights in Iceland

Did you find this guide to seeing the Northern Lights in Iceland helpful? Are there any more pieces of information you’re looking for in order to prepare for your Aurora-Borealis-inspired Iceland trip?

Or, if you’ve already taken a trip to Iceland and were lucky enough to see the Northern Lights there for yourself – do you have any insider tips to share? Add your suggestions and recommendations in the comments below.

If you are planning a trip to Iceland, you may also enjoy: